I’ve run into two uses of Goldilocks as metaphor today. One was in this set of posts on the topic of first language acquisition that I am posting here so I can find them again to share them with my linguistics class next spring.

Scientific American’s Cynthia Graber (author of the article linked above) got the metaphor from the open access article by
Celeste Kidd, Steven T. Piantadosi, and Richard N. Aslin, “The Goldilocks Effect: Human Infants Allocate Attention to Visual Sequences That Are Neither Too Simple Nor Too Complex”.

But she ended her article so perfectly for the metaphor:

Like Goldlocksâ€™s porridge, it has to be just right.

Baby Attention Learning from Live Science is another news version of the open access article by
Celeste Kidd, Steven T. Piantadosi, and Richard N. Aslin, “The Goldilocks Effect: Human Infants Allocate Attention to Visual Sequences That Are Neither Too Simple Nor Too Complex”.

“You would think that the more complex something is, the more interesting it would be. That’s not the case with babies,” study researcher Richard Aslin of the University of Rochester said in a statement.

No, I don’t think that. I give up when something is too complicated. Why wouldn’t babies? 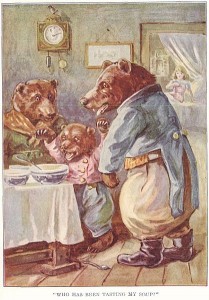 These articles (all three) reminded me of reading I’ve been doing–Daniel H. Pink’s Drive and Julie Dirksen’s Design for How People Learn, both of which use other research (such as Csikszentmihalyi’s on Flow) about adults’ need for not too easy, not too hard. I don’t think the Goldilocks’ attitude is limited to babies.

First, they provide employees with what I call “Goldilocks tasks” –challenges that are not too hot and not too cold, neither overly difficult nor overly simple. (Kindle reading access 1574 of 3487)

By the way, neither Pink nor Csikszentmihalyi are referenced in the open access article. Perhaps someone forgot where they got the idea? Or maybe they came up with the same idea at the same time? The article was published in 2011. Or maybe they all borrowed it from someone else? Or maybe it is just such an obvious metaphor that lots of people use it?

How Babies Learn, in photos, from Live Science.