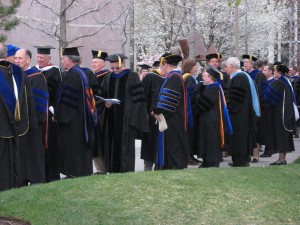 “Earning the PhD and a False Sense of Hope: My Experiences (So Far) in this Racket Called Academia”Â is Dr. Kelli Marshall’s discussion of her academic educational and career experience.

I do not think that what she has gone through is unusual.

I am afraid that it is going to become more common than it is already.

To sum up her situation:
Dr. Marshall received a PhD in what most people thought was a relatively marketable humanities area. (“Groundbreaking” one of my friend’s in a very closely allied area’s T&P outside letter said.) She had far more experience teaching than her cohort. She has publications. She took a VAP. Her husband left a good position for her move. She lived on unemployment. Â After several years, her husband has a full-time position again and she is an adjunct–in line to become a long-term adjunct (which I can say from personal experience does NOT sell well) and concerned because of recent postings requiring a PhD received within timeframe.

Then she saw some job postings that specifically precluded her from even applying because they carefully requested a degree gained within the last three years.

Reactions to that information among academics was strong, as you would expect.

Sell-by date for PhD degree problem:
Inside Higher Ed’s Restricted EntryÂ says: “‘We were told to ride out the storm, but it seems we were lied to,’ he said. â€œEveryone knows that there is this bias against lecturers and adjuncts. This ad codifies it. It is brazen enough to just put it out there.â€’

A blog post, Old PhDs Need Not Apply, says: “Â I find the language to be astonishingly dismissive of the reality of the humanities job market. As Eduard Gans states below, there are any number of reasons (besides already being in a tenure track job for 3 years) why someone might be 3 years or more out from their degree, completely qualified (eh hem), and looking for work.”

Dr. Lee Skallerup Bessette writes in her Inside Higher Ed blog post on the topic:

I think many, many long-time (heck, even short-time) adjuncts and non-tt facultyâ€™s hearts sank when we read, in plain language, what we had long suspected and feared (reading the comments onÂ this blogÂ didnâ€™t help, either): we are not what departments are looking for. We have priced ourselves out of a job (or aged ourselves out of a job. Or weâ€™ve past our â€œsell byâ€ date. Whatever.).Â  There is a sick irony to being the lowest-paid people on campus and then being told we donâ€™t qualify for a job because weâ€™re too â€œexpensive.â€ This is the paradox of higher education today. 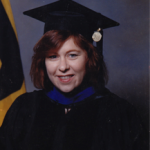 My experience with the job search process:
I worked on my PhD in the “glory” days of English in higher education. I called my alma mater from my PhD university and asked for a full-time position, which request was granted in less than a day. I moved home to full-time work with the written guarantee of a raise and a tenure-track position as soon as I was no longer ABD.

Instead of working like a maniac on my dissertation, I had babies and became a stay-at-home mother. I had no expectation that getting back into the job market would be difficult–after all it hadn’t been hard to get into it.

Then, finally, after three moves and a number of years, I finished my dissertation–just barely within the 12-year time limit allowed by the granting university.

I voluntarily worked part-time as an adjunct for six years. I was still homeschooling my sons and did not want full-time work.

Then, when I stuck my toe in the job application process when a great job opened up where I was adjuncting, I discovered that long-term adjunct work was a problem. I also discovered (as I probably should have known) that I needed research–conference presentations and publications–to get hired.

So, I began working as a full-time adjunct and pumping up my research.

In two years (April 2008-August 2010), I:
taught 20 classes
had 15 articles or chapters accepted and published
presented 22 papers at regional and national conferences

I was able to do this only because my family was also completely committed to my having a career in my field (and willing to do without my full participation for a while) and my husband’s job paid sufficiently that we could fund 22 conferences. 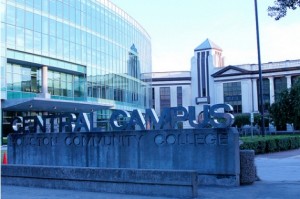 My abnormal experience:
In August of 2010 I applied for two positions.

In August of 2010 I received an offer of employment in one of those positions (a non-tenure track but relatively stable long-term assignment in a system without tenure).

Then in April of 2011 I received an offer of employment in the other of those positions (a tenure-track position that looked relatively stable as well).

I loved the community college I worked at and in many ways wish I were still there. But the political situation and my experience with non-tenure track faculty being booted out (at another, private institution) led me to believe that the tenure-track position was more likely to remain stable–and it was at my alma mater, my home institution, and thus was the job I had always wanted to have, whenever I finished my mothering duties.

So I, of all people, know that there is hope. I did all the “wrong” things and I not only received one full-time, long-term job offer at a school that I miss with colleagues who were amazing, I also received a second tenure-track offer at another good school with great colleagues (some of whom were already my friends). 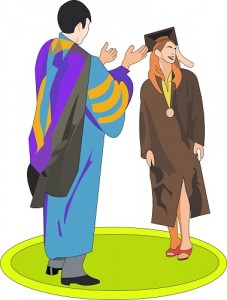 I have tried to discourage the up-and-coming PhD candidates to stop and think and do something else.

My experience with recommending against PhDs:
The students don’t listen to me. They know I received a full-time, tenure-track position and so they are sure that they will as well. I’m not “special.” I’m not a “superstar.” They know that. And they fully intend to be a superstar.

So, in a way, my own experience is counterbalancing (and overbalancing) my advice.

In a way, that is to be expected. These students are professional students. They love and admire their professors and want to be just like them. Their passion is for becoming a professor in their field. Why would a little salt on a wound that has not yet appeared hurt them? It doesn’t.

And what about those who are writing about the issue of PhDs and no jobs… At least two of the people cited above are still working in the fields they love BECAUSE they love it, DESPITE the knowledge that it is unlikely they will receive a tenure-track offer. They are recommending you don’t get a PhD either, but their lives ALSO tell you that it is worth it.

Sometimes our actions speak so loudly no one can hear our words.

One thought on “To Hope or Not to Hope… Is that a question at all?”