In my earlier discussion, I mentioned that I had no students who made high grades in the first version of the diagnostic I gave. 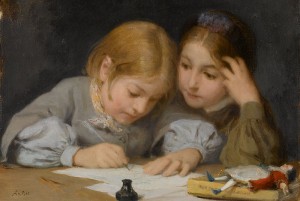 I did, however, go with my plan to work on ideas for the diagnostic essay–as if we were in the process of writing. I had the students create three different introductory paragraphs for the prompt. I also had them come up with various metaphors and analogies. They read each other’s intro paragraphs and worked on the metaphors in group. I had them make a list of possible examples to use.

I was hoping that my students would do better overall. That happened. I talked to the students about the difference that working on the paper over time made to most students, even though I did not let them use any notes when they were writing the paper.

I also, primarily jokingly, said that the eight students who made the same grade on both diagnostics had my full permission to write their papers the morning it was due. The rest, however, really needed to work on them ahead of time.

The students were not particularly persuaded. Many of them moved only a single number (out of 9).

I explained that as far as grades went, that could mean as much as a 20 point difference in the grade (a low five versus a high six, for example). They were a lot more impressed then.