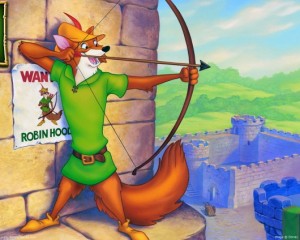 In modern literature these two have blurred until they can meet. Now we are experiencing the result of years of intermingling makes Camelot and Sherwood together.

The first mention of the two together was in the poem by Thomas Love Peacock â€œRobin at the Round Tableâ€ written in 1817.
King Arthur spends his 300 years of waiting for his return partying.
Invites King Richard.
King Richard tells about RH.
Arthur says to fetch RH and wants to make him a knight.
RH never arrives on scene.
Arthur stays too busy talking to others in the poem. 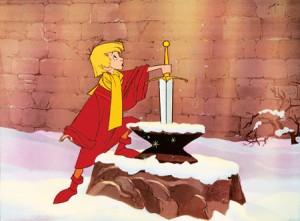 There are other places they have met since. One most of us are aware of is Once and Future King.
RH teaches a young Arthur.
Merlin orchestrates the meeting.
everything impressive and larger than life
gnarled, even though young
needs children to attack Morgan le Faye, because only innocent can enter fairy homes
teaches kingship:
dark side of magic
how to shoot
woodcraft (from Maid Marian)
leadership
respect
RH repeats his strategy 2x to his captains, then his captains repeats word for word to each other
RH ids himself as a Saxon

She went through two British cartoon series and a television series as well. Fascinating!