Question:
Why do Arthur and Robin Hood come together?

Elizabeth:
â€œtwo medieval heroesâ€
the question of â€œwho would win in a fightâ€
so the time periods are collapsed in peopleâ€™s minds

Lorraine:
One is top down and the other is bottom up. Two ends of social spectrum.
not a lot of ways to sell things using a King, but lots from Robin Hood
King Arthur flour and Robin Hood flour
also RH beer

Elizabeth:
usually Arthur is the tragedy
RH is comedy
But BBC is tragic, because kill off Marian
and Arthur and Merlin are always joking, showing comedy

Question:
How are they alike? (Chaucerâ€™s yeoman and RH)

Lorraine:
serves the noblest pilgrim
lives in the forest 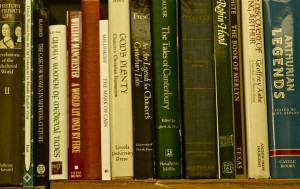 at some RH conferences, connections between Chaucer and RH, yeoman portrait
Printers used boiler plate, and used the same picture for Yeoman and Robin Hood.

Chaucer, in his biography, he was robbed 3x by the Briarley Gang. Horse stolen out from under him. Going to royal manors and paying the builders. Briarley Gang robbed him 3x in 2 days. Shortly after that Chaucer quit the job. Robbed him at the Foul Oak.

William Langland talked about how everyone knows the Rhymes of RH. They are sung in all the taverns.

Chaucer doesnâ€™t give Yeoman a tale. Guessing it was a RH ballad, if he had one.
It is connect the dots. Dots, but no links.
No direct evidence that Chaucer would have written about RH, but would have known 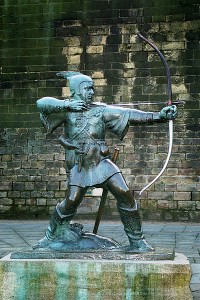 Elizabeth:
found the answer of the poem from Peacock at the Camelot Project

Audience: Medievalism is a huge movement in the 19th C. Used medievalism for the political right and left.