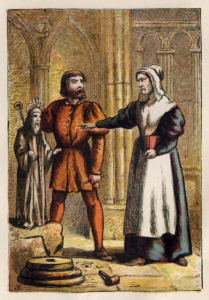 whole piece
martyrâ€™s story
not a mere note
Foxe downgrades the woman throughout the story
but it builds up the woman
not a monastic member, not exceptionally beautiful, not a virgin or pure,
average Protestant woman without even a name to make her unique

takes exceptional from medieval and makes it inward in Prestes Wyfe

Her story is something that a normal woman may have.
Implies her strength and bravery are contained inside of her–not gifted, after specifying her place, â€œhis wife being an honest womanâ€

What is not said is notable: no physical description, no age, no name.
This allows any married English woman to relate because her power comes from within her.

so different from previous martyrs

one of conspicuous states of medieval martyrs = virgin
sometimes whole story would revolve around them attempting stay pure
3 virgin sisters, steadfast against Hadrian
nipples cut off
thrown into a furnace, which blew up and killed 500
fire killed 1500
exceptional, holy harlots
but even then, the chastity or sexual experience and devotion are front and center

Foxe gives in Prestes Wyfe a role model that is attainable and not necessarily an ideal situation.

Question: There are lots of versions of Foxeâ€™s martyrs, with the stories rearranged. Was this tale surrounded by holy women or some other context?

Madeline:
This is my first delving into Foxe.
Looked at female martyr stories.
Contrasted with medieval martyrologies.
Then looking at Foxeâ€™s other women martyrs.
Did look at different versions of Prestes Wyfeâ€™s versions.
Usually in the same spot in his book. Very consistent.
Context interesting. It is a one shot in his book. Not repeated anywhere.
This is a single person. Not a large group. Doesnâ€™t relate to the other people surrounding her.
There is also an illustration of her being burned. She is alone and not group.

NOTE: Madeline Barnes said that she is an undergraduate! First, this paper was really interesting and well done for anyone. Then she turns out to be an undergraduate! Oh my. Can we recruit her for grad school to my college? I want to teach her.