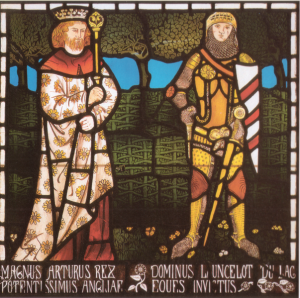 most obvious source for a writer in prison = Boethius

Thomas Wright argues on OF source for â€œSir Garethâ€ seems to regard that as a link to Maloryâ€™s Gareth, which he calls Boethian
â€œfortune is soâ€¦.â€

Consolation of Philosophy was often imitated at the time.
Strange if a knight prisoner did not find Boethius usefulâ€”fortune, hap, and unhap.

hap
along with adj happy
evocative word in ME, usually means luck or chance

How does Malory use them?
What hap means to Malory is germane to why Malory believes things happenâ€¦
Is it a circle of destiny? Providence guiding knowing and unknowing? Treachery?

Text contains support for all different choices of fortune.
Much that looks like destiny to some can also be providence.
Lancelotâ€™s assoc w Guinevere, helps Mordredâ€™s treachery along

Gawain, who blames himself for this unhappy war, â€œit there misfortunâ€™d meâ€
author may not be inconsistent
sometimes his views are supported by his characters

unites destiny and characterization and maybe providence
destiny and fortune work through people
Mordredâ€™s manipulation of people should make people blush with shame, says Malory
despite Maloryâ€™s many years in politics he confesses himself amazed at evil men trying to do evil to others

fortune has nothing to do with goodness.
Philosophy presents this as a good reason not to value fortuneâ€™s favorite.

As Philosophy and Boethius agree, then wicked men are unhappy because all men desire good.
This is a literal translation of the Latin, not the English word.

â€œanger and unhapâ€ started by â€œtwo unhappy knightsâ€ in the sense of being unlucky both in themselves and for others
They also have free will, but the outcome of their conspiracy is unfortunate for all concerned, including them.
They succeed in surrounding the bed chamber. But they also succeed in getting most folks killed.
Mordred succeeds in driving a wedge between Arthur and Lancelot but does not succeed at his goal of being the king.
â€œIt misfortunâ€™d Lancelotâ€™s killing of Gawainâ€™s brothersâ€¦â€

Arthur is counciled to stay away from Mordred because he is unhappy (unlucky, full of misfortune).

Hap, however, meaning Boethian fortune, seems to be a necessary part of all other explanations.
Hap has nothing whatsoever to do with goodness.

Question:
You think it would be hard for Malory not to have known about Boethiusâ€™ philosophical schema? Do you imagine Malory could read Latin? Or was it translation? Or just the kind of idea, folk philosophy?

That is always the question.
Lancelot refers to Fortuneâ€™s wheel, but not requirement that Malory read Boethius. But there were a lot of French translations. Lots of knight prisoners too.
Donâ€™t know if I can make a comparison between Consolation and other works, there were quite a few vernacular translations.

What non-textual ways of knowing Boethius and the wheel of fortune could Malory have had?
churches with wall paintings of the wheel of fortune
Cathedral at Rochester has a painting
You would have to know what it came from, even if you hadnâ€™t known it.
So is it in the popular culture? Yes, it is.
Arthur has the vision of being strapped to the wheel. That was matched in a few of Maloryâ€™s sources.
John Borman picks that up in Excalibur. the music score
uses the theme when Arthur is going up and down wheel of fortune

2 thoughts on “TEMA: Uses of Hap, Unhap, and Fortune”