going to suggest what we get in Maloryâ€™s narrator, only those passages where he is not quoting a character, where he is taking narratorial function
it is anima-animus, new creature joined by both sensibilities
Jung related

Claims about Maloryâ€™s men
evinces distinct psych tendencies that are always gender driven
men are less rational than women and the narrating voice of the Morte
men are more likely to tell stories than women or narrator (truth or stories?) 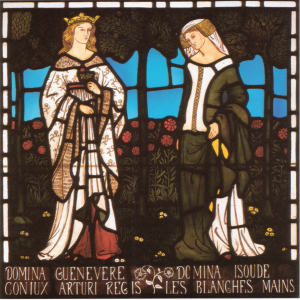 Claims about Maloryâ€™s women
more rational
less likely to tell stories
qualifier: donâ€™t get to hear them inside of their heads, usually women are speaking to men. Not speaking to each other very often. Except for Elaine taunting Guinevere.
Note: This relates to Dr. David Day’s presentation on how Criseyde thinks.

Evidence, discussionâ€”how I arrived:
1. automated textual analysis program (lots of work immediately, would this be useful?)
have a deeply scaled writing discussion available
because of that, the factor analysis, I have semantic properties of language available.
including language that is uniquely cognitive in focus
cognitive properties of inclusion, exclusion, analytic writing
86% of words in the text and have comment upon them
(Is this his own program?)

verbal, mechanical, numerical, and spatial
even in verbal include reading, writing, understanding, etc.

But common to all of them, is the general ability.
Stable and robust correlation among the tests. Always positive. Always moderate to strong. This model of human intelligence captures 75% of variance of test takers.

Identifying what qualifies, what is different between insight and X in writing?
we know this about writers and speakers. We know it is consistent and stable over time.
Great deal of consistency.

Through writing we have another way of measuring and observing individual differences. 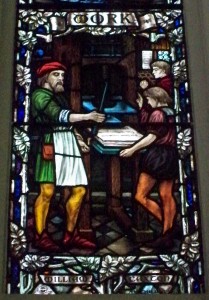 cognitive complexity with greater effect on bottom of equation, then smaller complexity

Why narrative seems to important to men (why so obsessed? men in action are in process of telling other men how many they killed and how they did it? Mead hall experience?)
Why Maloryâ€™s narrator seems to disavow story yet can mightily discern and discuss
(what is that about? why is narrator so distant emotionally?)_
narrator as historian (not a story teller but a historian. Idea to preserve all Arthurian stories. One lovely grouping. Maybe he was thinking editor rather than story teller.)

This is my main research line.

Question: Is it the same software to determine authorship?
Donâ€™t think so.
Latent analysis would determine coherence.

how do you go about choosing the passage from the text?
I was flipping through the Caxton passages. I probably oversampled Ballen.

Does it change if you do other things?
Today you could assign passages from the whole of the book, could do a population study of the entire data set.

trying to taunt you people
Wonderful tool.
Not like you donâ€™t need to be a reader. You need to read inside and outside the text. Acknowledge natural language use tendencies.