â€œHow I Came to Terms with Lancelot, or Lancelot as a Penitentâ€
Amanda King
Texas State University, San Marcos

Who is responsible for downfall of Camelot? 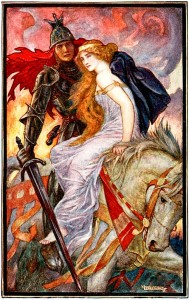 Lancelot kills off Camelot.
How do his actions make him a modern saint?
Penance is the liturgical effect of prayer.

Lancelot was an adulterer. Also a murderer.
1st opp to overcome, sees Grailâ€™s light but canâ€™t find door, but because he is already taken with sin, he canâ€™t get in
adultery
pride
being stubborn and continuing in his sins
reflects on his life and strength of prowess
Malory refers to Lancelot being shameful and sorrowful

Lancelot attends mass in a hermitage and confesses.
Asks for council.
Hermit tells Lancelot should avoid queen.
Hermit knows the knight cannot so easily lay aside an illicit love affair.
St. Augustineâ€™s old prayerâ€¦ â€œgrant me but not yetâ€
Hermit insists that Lancelot is hard. Has hardened his heart.
Hermit says God has given him strength.
Sin is bitterer because he will keep sinning.
Lancelotâ€™s obstacle is stubbornness.

â€œnever to be so wicked as I have beenâ€

Several times Lancelot offers a full, religious penance which would have enriched the souls of the dead, in that they are in Purgatory and he would have helped to get them out quickly. Each time this is rejected.
Note: I think that this lack of care for his brother’s eternal rest is indicative that perhaps Gawain is not such a good person as we usually interpret him to be. A medieval audience would have recognized his desire for revenge (which hearkens back to the Old English culture) and his lack of concern for his brothers’ souls.

Question: Heâ€™s off the hook, you like him better?
I no longer groan about Lancelot.
Oh, weâ€™re back to Lancelot. He has messed up big time, but he does as much physically possible to make up.