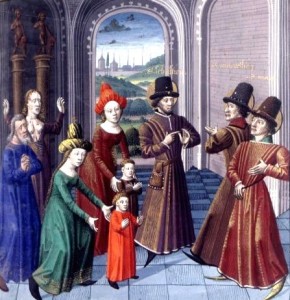 Last year I was at the Disease, Disability, and Medicine workshop at Nottingham. So we decided to talk about disabilities in the Middle Ages and we wanted to talk about gender differences.
Postpartum. Beserkers. There is a woman in one of my sagas and she beats her breasts with swords until she is in a frenzy and rides off with the men.

So, are there gender differences of disability?
I am revisiting this topic.
Itâ€™s a thought piece.
Raises more questions than it answers.

status of women generally compared to men in medieval England

without medicine or comfortable hospital rooms, women suffered after birth
modern scholars can only speculate on whether postpartum was in medieval
sometimes women in medieval times killed their children right after birth

Mothers offer murder after childbirth, and so did fathers. Records sometimes described as â€œtemporary madness.â€

Sometimes rage would kill others besides children.
One man tried suicide after killed daughter.
Another man killed his wife and then killed himself.
Donâ€™t know if this is a mental break.

Maude killed her two sons through madness and not through felony
Ill till she could not tell good from evilâ€¦ frentic. killed her two children John and Alice

homicide of John, son of Stephen Brewman, by his mother, while mad
(and two others, described this way. All married. They had times of madness. the while implies that they were not always crazy)

Why are there no wives accused of killing husbands in the record?
Food for discussion.

Question:
Could be furious but not crazy?

Furiousus is actually a mental disease in the Middle Ages.

We have plenty of women who kill their husbands, who are sane. So if you have madness as an excuse, you would think I would find one.

Have you looked at the Yearbooks? Almost always there is something weird there.

Yes. Thereâ€™s nothing there.
Plenty of mental health cases in the Yearbooks.
Guy who wants to stay in jail because he is crazy. Or guy who sees flies when arenâ€™t there.

What about Lassitude or fastidiousness. Isnâ€™t furiousus butâ€¦ Do you see this used?

Yes, but in conjunction with other things.

Other questions:
Who was applying the terminology?
Who was in charge of determination of mental illness?
Do you see changes in it over time?

Sure.
Most out of administrative records of land transactions or court records out of the court of England.
Civil court.
A range of terminology.
Lots of number crunching and databases.

in the middle is insonium

no compes mentes closer to idiota

under the influence of the moon, knowing neither good nor badâ€¦ sprinkled in

You get combinations of terminology to describe mental conditions.

Question:
Is it a classification thing?
Maybe the women didnâ€™t have the stigma.
Lizzie Borden all this evidence against her, but she is a woman, so she couldnâ€™t have done it.

Yes, I am wondering about this.
For years, I found no idiota who murders. But then I found one. Very passive guy. But he approached by a guy in a costume who acts scary. The guy is trying to scare him. It works. The idiota asks him to reveal himself in the name of God. But the guy doesnâ€™t. So he killed him. When he found out it was someone he knew, he was very hurt. He kept repeating that he asked him to reveal himself if he was a person.