Took a class on Waste. Read Beowulf, Hamlet, Piers Plowman, etc. Has a lot of church history background. Looked at it from a church history. Grad student with emphasis on English Reformation and Tudor studies

waste = garbage
memories can be abandoned intentionally
if not recalled or recorded, the history is forgotten
What is chosen to be remembered is also significant.

Appropriation is the mother of garbage.
We choose or accept something while rejecting something else.

Any item we can imagine has been deemed worthy of thought or deemed waste and thrown away.
People have been seen as waste because of ethnicity, race, color, gender, social status.

pagans and heretics gained role of “other”

Definitions and laws were extended to cover non-Christians. They lived within and without the law. Did not have the same legal rights of Christians and citizens.

Rules were devised to determine if Christians could even hang out with others.

Since era of St Augustine, Jews were supposed to be examples of what Christians should not do.
Christians felt they would be damned.
Viewed with outright hate.
clothing, ritual customs, distinctions

Christian religion blamed Jews for death of Christ
by 12th and 13th C, Europe was free of non-Christians except Jews
thought rationality would show Christianity true, and Jews were therefore non-rational and/or non-human
Jews were grouped with Satan or grotesque

Also thereâ€™s quite an active scholarly exchangeâ€¦
(1140s William of Norich, blood exchange)â€¦
School of Saint Victor in Paris is talking extensively about the wisdom/truth of Jews.
Scholarship seemed respectful of Jews.

Answer: medieval studies on medieval literature and waste
primary focus was on literature shows people as waste
Didnâ€™t focus on any of the positive, or any theologians. Or any other discussions.
Not consistently good stuff.

Piers Plowman and Chaucer were what I was using as sources. 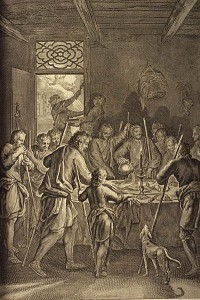 Question: blood of Christians during Passover, blood of crucifixion?
Why wouldnâ€™t they put the blood on their doors?

I didnâ€™t see that.
They mention the Jews abusing the crucifixion but not on their door.

Jewish children were born with horns on their heads but Christian blood would purify them and get rid of the horns.

Question: Thinking about what you are saying when you are comparing cultural image of Jews and waste, something discarded. Not just as cultural waste, but saying a source of impurity and pollution.
So it wasnâ€™t seen as discarded but was seen as pollution, so actively pushed away?

One of the church edicts required that the Jews wear a yellow badge.

Question: Did you analyze the effect of the Black Death?

No. But they had the same rate and yet were accused of starting it.
Jews lived in groups by themselves, so it was easier to blame them.
There were rumors that the Jews poisoned the water in a town and they were murdered.

They had been accused of poisoning the wells of earlier than the Crusades.
Thereâ€™s a pattern to accusing the Jews:
killing babies
desecrating the host
poisoning the wells
Those accusations occur every time there is a problem.
Thatâ€™s why there was the ghetto.

Couldnâ€™t own property in Europe.

Could own in parts of Spain. Also in Poland until the 15th C. Lithuania were pagan. Jews lived there for centuries with little or no problem.

Jews were murdered in Germany during the Crusades.
Yes, but the people who murdered them were immediately punished.