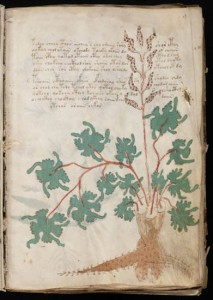 A radio-carbon dated 15th Century manuscript, masses of illuminations, and studies by MI8 of Britain…

Sounds like the beginning of a blockbuster movie for English professors.

But what the scholars have found is that NO ONE CAN READ the Voynich Manuscript.

Despite their skills, not one of the above was able to read the manuscript, leading to the growing suspicion that the text does not involve any encryption, because that would have been broken by now. And it may not even involve any actual language, either: In 2004, the aforementioned Gordon Rugg declared that the text was just gibberish â€” an ancient hoax possibly assembled through a non-functional version of a Renaissance coding technique called the â€œCardan grille.â€ Rugg could not, however, explain why anyone in the Renaissance would do such a thing, nor did he address the amazing effort that went into the hundreds of illustrations. After a century of study, the Voynich Manuscript still mocks us.

I am betting the Voynich Mss means something. And I am looking forward to someone actually figuring it out and sharing with the rest of us.

Doesn’t the thought of a mystery in literature, one that is still unsolved, whet your appetite to get after it yourself?

If so, then go for it. Yale’s Beinecke Library has put the whole thing on line.