From the beginning of a very interesting (and accurate) article on “The Academic Online: Constructing Persona through the World Wide Web” by Kim Barbour and David Marshall:

One of the key influences in the study of online identity construction comes from Goffmanâ€™s (1959) Presentation of self in everyday life. The idea of online identity as a performance, utilizing Goffmanâ€™s dramaturgical analogy, holds a particular attraction for many theorists (Buckingham, 2008; Donath, 1998; Hogan, 2010; Kashima, et al., 2002; Pearson, 2009; Zhao, et al., 2008). Persona creation is a much more conscious process in online settings as opposed to offâ€“line. Stearn (2002) commented that the â€œstrategy and intentionality behind selfâ€“presentation is illuminated in online settings, because communicators must consciously re-present themselves onlineâ€ [1]. It is this idea of intentional presentation of a specific identity from the â€˜composite of multiple selvesâ€™ which exist in all of us [2] that forms the basis of persona studies.

Another important consideration within studies of online identity creation is that of authenticity, an issue discussed, for example, by Turkle (1995) on persona presented in anonymous MUDs (multiâ€“user domains) and online bulletin boards. Donath (1998) discusses the problems with maintaining a â€˜fraudulentâ€™ identity online, by considering the relationship between Goffmanâ€™s discussion of â€˜expressions givenâ€™ and â€˜expressions given offâ€™ (or more simply, intentional and unintentional messages), stating that â€œOne can write â€˜I am femaleâ€™, but sustaining a voice and reactions that are convincingly a womanâ€™s may prove quite difficult for a manâ€ [3]. Although there are opportunities for identity play online, what we discuss below is the creation of authentic, intentional, constructed personas that extend the boundaries of an academicâ€™s individual influence beyond institutional boundaries, and allows them to work more effectively in the radically changed worldwide academic environment.

The role that Twitter plays in this dynamic is an interesting one to consider. On the one hand, it is a sharing platform designed to function easily on mobile devices, particularly mobile phones, wherever a user happens to be. In this sense, it works to break down some of the barriers between an academic and their students. On the other hand, it can be seen as a â€˜saferâ€™ form of social networking; because tweets are short and able to be accessed even by nonâ€“members, there is still a sense of a public forum rather than special treatment for those who engage with staff on this platform. The ability to point to new materials or interesting online materials by posting URLs, and to connect with students outside of class time, can be seen as a boon for instructors. Through the capacity to â€˜followâ€™ other users without their explicit consent, both academics and students can engage informally with an international network of researchers and experts in related fields. 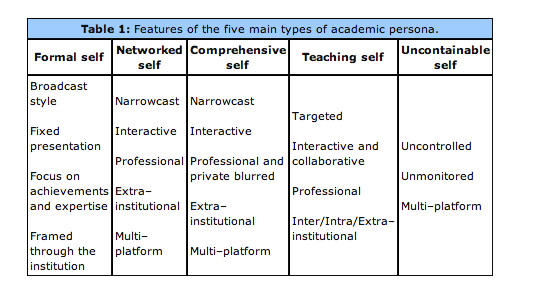 The thing I like most about this model is the teaching self is described as inter/intra/extra-institutional. Oh yeah. They nailed that.

It can be assumed that in the humanities, at the very least, the construction of a public persona online will become increasingly common for emerging academics. This type of persona allows an early career researcher to connect online with others either at the same stage in their careers, or with more established researchers, raising their research profile and potentially improving career prospects. The ability to engage in dialogue with leaders in a field of study, gaining insights, or even providing critique, not only allows researchers to improve their own work, but also locate their thinking more clearly within a wider academic community.

I find that hopeful. …