I have been pondering the idea of the classroom as a game (or a class as a game) for quite a while. 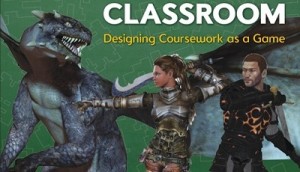 This last Christmas my husband purchased a book for me on a class that was the game– The Multiplayer Classroom: Designing Coursework as a Game by Lee Sheldon.

Then this past summer I read Jesse Schell’s The Art of Game Design and spent most of the time in my extensive notes applying the concepts to the classroom. I didn’t actually succeed in using most of them (or any of them? I might have to go back and look) but I took the notes and wrote predominantly on how to apply the book’s concepts of game design to my early British literature course.

There was irony there. For one, Schell says that folks don’t use the ideas in education and they could. By the time I got to the section where he said that, I already had ideas. It’s part of why I was reading the book to start with. And, of course, I’d read Sheldon’s book and that is what he had done–though with a different twist. For another, game design as classroom management style is an interesting metaphor and yet also a potential/real option, even for a literature class.

I didn’t see how I could make it work as well in first-year composition, but maybe part of that was that I’m still working on that class. Brit lit, even with the switch of schools, is the same course I taught at all three colleges. (I still don’t see how it would work in an fyc classroom, but that doesn’t mean I won’t be thinking about it and looking at it.)

But when I got into the Brit lit class, I didn’t have a strong enough handle on how the specifics would play out in this semester’s course. … And it’s easier to fall back on what I have done before than to figure out and/or follow an entirely different strategy for the class.

I had a grad class to teach this semester and I was worried about it, so, for the first five weeks–despite the lack of strength in the classroom experience for it–I was focused on that class.

No game in my classroom yet. Or at least not this approach to the classroom experience in this particular class–even though it would be the best suited of the classes to be a game experience.

I have taught classes before on games and we’ve played games in other classes, even the Brit lit class in at least one iteration. I taught a middle school class called Games and Races through History and the focus of the class was games, while the format for the class was history. Obviously that means I have played games in my classes. But I’ve never had a class configured as a game.

I am still thinking about it, planning on doing it, hoping to implement it, strategizing for the time when I have both energy and time to re-design/structure the class as a game.

That’s what caught my attention about a post on translation. Originally it was a tweet that was totally not on gaming that made me open the post. “What happens when 21 translation students create their own translation standard?” That sounded interesting.

Then I opened the post and began to read:

The Fall term has just wrapped up here at York University, which means the second Reacting to the Past game in my undergraduate translation theory class is now over.

Interesting. You can see why that would catch my attention (now that I’ve filled you in on the back story that would impact the attention-catching center of my reading brain).

Apparently the class is only five weeks long. And the game IS the class, which is also how Sheldon’s class and book works, but not how I am envisioning the Brit lit class. Hmm. Wonder if that is a potential problem with the model. I’ll have to think about that.

At the end of her post, which basically says what the students did during the five weeks, the author writes:

Iâ€™m currently surveying the students who completed the course to see what they thought of the two games, so Iâ€™ll post some of their feedback once Iâ€™ve finished collecting and analyzing the responses.

I would love to know what your experiences have been.

One thought on “Metaphor or Reality? Class as Game”