I attended Sam Houston State University’s first conference on Medieval and Renaissance Thought. It was actually quite amazing!

There were folks who came from France and England to present! Folks came from Massachusetts and Mississippi. 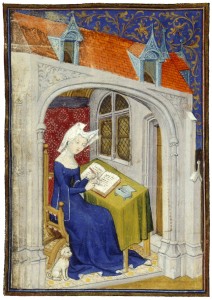 I heard some amazing papers including:
Anne Babson’s talk on Christine de Pizan’s Construction of a Kingdom Come for Women
Katherine Echols’ talk on Representations of the Wanton Widown in 16th and 17th C Popular Culture
Mith Barnes’ presentation “A Theology of Eating in The Divine Comedy”
Romana Cortese’s talk on Dante’s Tree of Life
Kevin West’s work on Dante and Orpheus
Tara Swewll’s “Common Misconceptions on the Medieval Period in Modern Popular Culture”
Ron Heckelman on the Subversive Rhetoric of Promising and Death in Everyman
Kimberly Bell’s “Playing the Wheel of Fortune in Somer Soneday”
and clinton Hale speaking on Anglo-Saxon Christianity.
–I will try and put some of my notes online, either this weekend or this week.

A medieval harpist, Dr. Cheryl Ann Fulton, came from California and she and Therese Honey from Houston presented a concert on Thursday evening after the soiree. It was lovely–and in a beautiful building, too.

It was a good conference with lots of friendly folks.

I highly recommend it for scholars from Anglo-Saxonists to late Renaissance, England, the Continent, and even the Middle East. There were music, art, and law panels–so it wasn’t just literature, either.

The keynote speaker on Friday morning was given by Dr. Richard North, who has a new book out on the origins of Beowulf.

3 thoughts on “Medieval and Renaissance Thought”