I am considering assigning creative projects as part of an upper division course in Old English Readings (in translation). –Actually the course is Brit Lit up to 1700, but we are ending in 1385 and concentrating on Old English.

I want to do this because it has been a while since I’ve had a creative project and I know they turn out well. (See The Best Final EVER for evidence.) 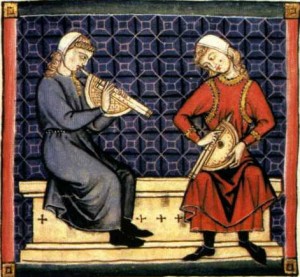 Things I have considered as possibilities (to offer students an option) include:
a quire of hand-written magical incantations based on readings about definitions of licit and illicit magic and the few charms we are reading
an illuminated manuscript of a short poem–with poem and illumination provided by student
a needlepoint of a scene from Bayeux Tapestry (saw one done by a high school student who had been failing before his imagination was fired up!)

Then I thought about how much I enjoyed learning medieval weaving at Maker Faire and creating a chain mail bracelet and a viking weave bracelet. So, I followed the suggestions of my spouse, and got on YouTube to renew my acquaintance with something interesting. I found three very different presentations of the viking knit using craft wire:
without words
Blue Kitty’s Creations
Potomac Bead Company version
Beadaholique’s version, which though I like their videos, this seems a little too much “use our product–which doesn’t seem easier than doing it yourself
and a useful, but annoying because it gives all the product numbers, version from Jewelry Supply.com

I thought about creating my own creative projects as examples.

I have lots of medieval costumes. I could stage a fashion show and do a video to present to the class.
I found some amazing Viking miniatures on ebay and if I were endlessly rich I would purchase many and some Celtic miniatures and Roman, etc, and stage a map of England through the ages with the miniatures being the different people groups. Then I would do a photography timeline.
My husband has hundreds of incredible images from RenFair and other shoots. I have dozens. I could put those into some kind of digital presentation with an appropriate narrative or a selection of medieval music or both.
I could cook a medieval feast and serve it on pewter dishes (for the rich) or bread trenchers (for the rest of us).
I could pull out my collection of medieval stories and saints’ lives and create kid-appropriate versions.
I have already created slideshows of illustrations of Judith and Beowulf. Perhaps I could use those somehow.

…
What would the parameters of the assignment be? How would I make sure that the students all did commensurate work and did not (as I know one student did the last time I tried something like this) write a poem five minutes before class and get an A, because they were an excellent poet?

One thought on “Considering Creative Projects”