I am teaching a junior/senior readings class this spring. I am envisioning the class including a reading digital presentation (where students read a short work and create a digital presentation on it), a research project (where students read up on some work or author or idea through scholarly journal articles and books and create a narrative of the ideas they found–though some would say they must come up with their own unique take on the subject and I am not sure that I am prepared to require that), and a creative project (where students take some aspect they enjoy artistically or creatively and present some related work). 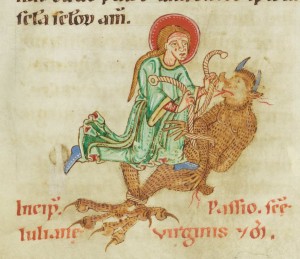 Reading ideas:
The readings for the digital presentation vary depending on what I want to accomplish. Unfortunately, I haven’t yet decided!

Originally I thought short works that I did not think that we would have time to cover in class but that were literary and Old English. This list would include works like
The Wanderer
The Seafarer
Deor, Waldere
Widsith
The Ruin
Fates of Men.

These readings range from 45 to 140 lines total. Those are extremely short and would lend themselves to a reading of the poem and perhaps some explication.

Then I branched out a bit. I thought of
The Voyage of Othere and the Voyage of Wulfstan
The Art of Courtly Love.
Those are fairly short, easier to read than the poems, but could be added to the list of options.

Then I considered having them read and discuss/describe/summarize or in some general way present an aspect of a longer work, perhaps from the Middle English period, since most of the works we will be reading will be from the Old English.

Then the possible works in the list included
King Horn
Sir Orfeo
Amleth
Havelok the Dane
Adventures of Arthur at Tarn Wadling
Bartolome Anglicus’ Encyclopædia (44)
Chretien de Troyes (77 pages).
These range in length from 15 to 77 pages. That is a significant differentiation. Also some, such as Sir Orfeo are verse translations, while most are not.

I also want to include the writings of Julian of Norwich and Margery Kempe, but they don’t perfectly fit within the organization of the class. Also they are very long, so they don’t fit my original length plans–even at the long end of the longer works listed above.

I included somewhere a note for reading two versions of The Battle of Otterburn.

I thought about making them do the presentation only on things we read in my sophomore lit class, so that I can use their examples for my sophomore students. However, in the original list only two of the works are things we read there. Everything else we are already covering in class and I DON’T want to do that with this class.

Research ideas:
Originally I thought this would be limited to them researching a topic related to a reading that has been done in class. However, that also limits them significantly as we won’t have done a lot of readings by the time this is due.

Things on my original list for research on readings we are doing in class include:
women in Beowulf
medicine in early England (Middle English period and earlier)
magic in early England (ME and earlier)
history of Merlin (reading some of the source material we will not read)
reading The Ruin and putting together a slide show of the Roman ruins of England with a discussion of history, related texts, archaeological digs, etc.

This expanded to other things which might be of interest:
the medieval undead (including St. Erkenwald, William of Newburgh, draugr of Icelandic stories)

Then I thought about having them read a single modern scholastic text (but not necessarily written for an academic audience) that they could read and then choose something from there to focus on. Examples include:
Roberta Gilchrist’s Medieval Life: Archaeology and the Life Course, which has a chapter that includes a discussion of zombies and relics as animate objects that have agency.
Jane Gilbert’s Living Death in Medieval French and English Literature, which includes a discussion of the Pearl Poet’s poem Cleanness/Purity and The Legend of Good Women.
Heads Will Roll: Decapitation in the Medieval and Early Modern Imagination edited by Tracy and Massey
Angels in Medieval Philosophy: Their Function and Significance by Iribarren and Lenz
Magic in the Cloister by Sophie Page

So I have vacillated on a traditional research paper or a research project, where they begin research on a topic of interest with an extended reading and then add shorter readings.

Would I be willing to have them create a solid annotated bibliography on the topic? I took a class in my graduate coursework where I had to do an annotated bibliography on some subject in English literature and I read every article our library had on the Exeter Riddles–which I had never even heard of before I started the annotation assignment. It was of significance for me in my love of Old English literature (though I no longer have the annotations I did then–handwritten on 5×7 cards).

You know, the more I think about that, the more I like that idea. They could read one book-length work and then a bunch of shorter works. They won’t have to come to a “unique idea” but they will have to construct a solid collection of articles on related topics which could furnish the beginning sources for a senior thesis or a graduate level paper.

I wish I knew these students better. What kind of works would they be interested in and does our library have these? I guess I could write to them over the break and get some ideas, so I can be looking for works they would be interested in. I want them to be passionate about the topic they are researching, so that it might actually be something they would use to write a paper in another course.

What is enough and what is too much?
Are these things too much to expect in a class? How much reading am I going to be able to get them to do? How much are they going to be willing to do?

I’ve actually assigned less reading than KC, a colleague, does in her sophomore survey. But she doesn’t have students do those three projects I am talking about. And I really think a mid-term and a final need to be done.

How do you decide what is enough to do and how do you know when you are getting too much on your list?