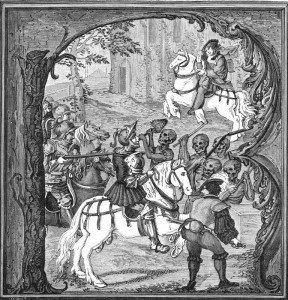 This interdisciplinary call for papers invites proposals for an edited volume on zombies in comics and graphic novels through the lens of medical discourse.
Like many tropes in science fiction, the zombie crosses discursive boundaries to become a metaphor used in clinical and scientific literature. For example, it becomes a figurative mediation for patients who experience “zombification” and the “dehumanizing” effects of illness and/or medical treatment, such as the numbing affect of clinical depression or ataxic effects seen in psychiatric patients who perform the “Thorazine shuffle”—a physical side effect that connotes so much more than the inability to ambulate properly. These are medicalized examples of what Daniel Boon’s “The Zombie as Other: Mortality and the Monstrous in the Post-Nuclear Age” calls the “cultural zombie,” a non-literal figure of zombification engendered through its cultural milieu. However, metaphor is only one of the many iterations of the medicalized zombie.
In addition to understanding the zombie as a manifestation or representation of medical, technological, and ecological anxieties, this collection will explore how the zombie is also transmuted and complicated in graphic texts. While a central section of the text will address plague, contagion, and epidemiology narratives, we seek to move beyond merely identifying the similarities between the etiology of infectious disease and zombie plagues to question how medical discourse constructs and is constructed by popular iconography of the boundaries of life, illness and health.
Our volume will 1) addresses how science fiction and popular culture influence medicine as much as biomedicine influences science fiction and popular culture, such as the Center For Disease Control’s use of the zombie in their graphic novel public health campaign pertaining to epidemics; 2) reveal how a trope that has become popular across the entire media spectrum speaks to cultural anxieties pertaining to pathology, ecology, and (bio)medicalization in capacities unique to the graphic medium; and 3) explore how (bio)medicalized zombies are prefigured in earlier forms and then complicated in comics and graphic novels vis-à-vis medical discourse, such as Simon Garth, the workaholic executive who is turned into a zombie by a voodoo cult in the 1944 Menace comic anthology.
Possible topics and questions to explore include
• How do voodoo zombies prefigure bio zombies? How does their fantastical and racialized etiology complicate the emergence of modern medicine after the fin de siècle?
• How does biomedicine interpret the zombie?
• How does the comic medium represent or complicate zombies in ways other mediums like film cannot?
• What does zombification mean in terms of neuroscience? In terms of epidemiology?
• What are the benefits and risk of using the zombie as a tool for public health? As a metaphor for illness? What kind assumptions do these approaches take? Do these examples reflect or critique actual instances of “living death,” undeath, contagion, or loss of rational agency?
• What does it mean to feel “like a zombie” when on an anti-depressant, anti-psychotic, or chemotherapeutic agent?
• How do families treat or perceive dependent loved ones who have had neurological damage from strokes as zombies that consume their time, resources, and lives?
• Is there a zombification that happens to doctors or medical students as they desensitize their natural abjection to death and affect?
• How can medicine or illness make one feel other than they are?
• How is medicine and illness dehumanizing?
While we welcome submissions on the ever-popular Walking Dead series, we are especially interested in earlier (1940s-1970s) images of zombies in comics, graphic pathographies, and super hero iterations (e.g. Marvel Zombies).
Please send 500 word abstracts to Lorenzo Servitje ([email protected]) or Sherryl Vint ([email protected] ) by February 10, 2014.