“Visual rhetoric refers to the visual communication of features and the effects they have on readers/viewers” (Allen 33).

“To use visual rhetoric effectively, then, we must be careful to consider each item’s appropriateness to our audiences and purpose” (Allen 38).

“A good source for finding examples of the appeal through ethos is personal websites” (Allen 39).

Quotes 2002 website credibility study from Stanford, saying 46% of participants rated credibility of a site based on visual aspects (Allen 39).

Allen suggests that students be required to design their own website, to practice developing ethos (39). She also says that visuals often present the emotional appeal. “[W]e are often swayed more by our passion or emotions (Corbett 34), and it is emotion that inspires us to take action (99)” (Allen 40).

Allen says that images are a good invention strategy. “When students in my classes are developing ideas, with the goal of preparing a recommendation report, I ask them to create visual representations of the problem as part of the development process” (41). She says she actually requires multiple visual representations, in order to facilitate movement beyond “linear matrices and flow charts to sketches and visuals based on freer types of associations” (41).

“[V]isuals translate relations over time into relations in space” which, she argues, helps them to be more easily understood (42). She notes that search engines have become forms of invention and that they have also become more visual.

She notes that “headings in the center are more important than those on the side, and items in a list are related” (44), which we know from stylistic guides but they are rhetorical strategies that can be used effectively. I think this is something that résumé conventions do not strictly follow (at least on center headings). It is, however, interesting to think about whether or not a name centered seems to have more importance than a name to the left side.

Is this a goal for digital presentations? Text becoming art?

She quotes Donald Norman’s discussion of usability design that visuals provide memory aids. This is the same thing that Jesse Schell argues in The Art of Game Design.

Visuals evoke curiosity. People want to know the story behind images that catch their attention (48). 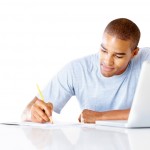 This is harder to do than I expected, as it seems like students are working on disparate projects. However, I know that doing the digital project does enhance the writing project. Should I revise the 112 schedule to reflect that? Or is having them do two kinds of composing at the same time asking/requiring the students to work with mental overload?