Literature “proceeds from a collective decision as to what will count as literature, a decision that will be in force only so long as a community of readers or believers continues to abide by it” (Stanley Fish qtd in Monnin 39).

“To be active participants of literacy within their own time and history during a new media age, Giroux & Simon further believe that we must ask students to interact with more than just print-text literacies. In fact, students actually interact and participate in many popular culture or multi-mode literacies, that, under our current and dominant system of standardized management, are unfairly neglected…” (Monnin 39).

“The world told is a different world to the world shown” (Kress qtd in Monnin 39).

Good history of canon and literature teaching in 19th and 20th centuries (Monnin 40-41). Would have helped freshman student this semester, if I had remembered it.

1990s (but mostly 2000s) teachers began “to make extensive and well-justified lines of reasoning for why they now want to incorporate multi-modal literacies, as forms of critical literacies, alongside print-text literacies in ELA [English language arts] classrooms” (Monnin 42).

Monnin says instructors are arguing that we should accommodate verbal-linguistic and visual-spatial learners (42).
I know people say that there are different learning styles, but psychological studies have not shown this to be accurate. Do we continue to use them because they are fun or because they actually help in some way that the psych researchers did not measure? 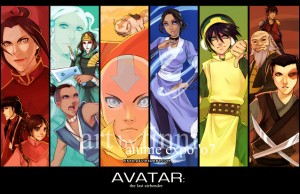 The Nickelodeon children’s show Avatar is structured as if it were a book series, with the first season as Book 1 and each episode serving as a chapter, which means an instructor can use “this cartoon as a literary media text” (Monnin 43).

“The metaphor of ‘media literacy’ implies that media education should include both ‘reading’ and ‘writing’. But, as with print literacy, there is an ongoing debate about the most effective ways to teaching these two areas, and about how they should interact” (Buckingham qtd in Monnin 43).

“[W]e need to ask our students to … be producers of these new literacies…” (Monnin 39).
Monnin argues that we need to learn how to “teach reading and writing with image” (43).
Then she discusses teaching the television series like literature, including writing themes on character development (Monnin 43) and themes and symbols (44).

However, she drops her argument here; she only says to write an essay on the multi-modal text of the children’s television series. She does not say the students should produce a video on the series.

This is where my teaching practices, asking students to produce videos (even when we don’t watch a lot of videos for class) is more valid, I think. I could use her arguments (or the sources and their arguments—or at least some of them) to set up the idea that we need to teach new media literacies and then move beyond her hurdle of the essay into digital essays.

What would a digital essay (as opposed to the presentations I already require) look like?