“American literary critic Jean Hagstrum … announced his intent to apply the techniques of literary criticism to the analysis of visual depiction in literature” in 1958 (Herlmers 1338 of 6169).

“Much of that work turns on the rhetorical ability of the writer to call forth pictures in the mind of the reader” (Helmers 1343 of 6169).

This reminded me of a picture I saw on the net recently. I could not find it, so I found something similar and made two jpegs. 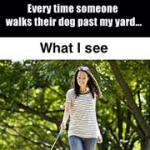 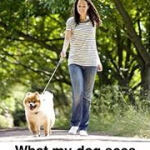 “rhetoric does not focus on correspondences between the arts, but on the image itself as a carrier of meaning” (Helmers 1358 of 6169).

“A visual rhetoric is a frame of analysis for looking and interpreting” (Helmers 1361 of 6169).

“three elements: the spectator, the space of viewing, and the object that is viewed… Meaning derives from the interplay of these elements… ” (Helmers 1373 of 6169)

“The past is a gap that readers must fill with that which they know at the time of viewing the artistic work” (Helmers 1390 of 6169).

“‘technical illiteracy,’ has the ‘possibility of making for the picture a narrative of her own choosing'” (Pearce qtd in Helmers 1403 of 6169).

“Narration animates the static representations of a work of art. Because the viewer must supply dialogue and sequential action…” (Helmers 1414 of 6169).

“[T]he ritual process of viewing allows the spectators to re-imagine the past and create stories about the images” (Helmers 1425 of 6169).

“I would like to expand the idea of ‘the rhetoric of the frame’ into a textual and culturally situated metaphor so that it more closely resembles the type of rhetorical work in which scholars in English and communications engage” (Helmers 1446 of 6169).

“the moment of recognition is the transaction between spectator and painted subject in which something draws our attention” (Helmers 1451 of 6169).

Rhetorically a painting must be engaged through both the spatial and the temporal (Helmers 1456 of 6169).

Discusses Wright’s painting An Experiment on a Bird in an Air Pump (see above) and interpretations from 1468 to 1633 of 6169.
discusses the science of the time
artists gaining patrons
education
exhibitions
growth of natural philosophy
curators
emotional reactions
scientific experiments
collective memory (1612-1633)

Then moves into a discussion of “Facing Nature,” “a retrospective of oils, watercolors, illustrations, and engravings” by Winslow Homer (Helmers 1633 to 1727 of 6169). 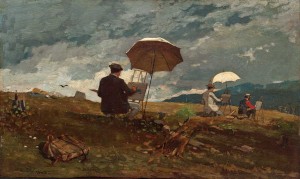 “what we experience in the space of the art museum is a way of seeing that is authored, not by the artist, but by the curators” (Helmers 1639 of 6169)

“Reading material memory and the rhetoric of exhibition spaces demands that all signifiers be examined, from ambient noise to the announced “subject” of the exhibition” (Helmers 1641 of 6169).

“props ‘staged’ the exhibition. They transformed the art into a theatrical space where the audience could enact roles” (Helmers 1657 of 6169).

“The distance between specter and art was thus reframed by contextualizing the artworks as windows onto a natural environment and into the past. The props also made a direct, physical connection to the nostalgic props for sale outside…” (Helmers 1659 of 6169).

For this exhibit, audio included “not only a voice interpretation of the paintings, but folk-inspired music” (Helmers 1664 of 6169) which “performed a subtle political function in situating Homer as a historian of the American past” (Helmers 1666 of 6169). 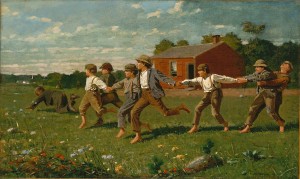 “The museum had used an ambient sound nature track to recreate nature within the walls of culture” (Helmers 1671 of 6169).

“Homer believed that his descriptive scenes should speak for themselves” (Helmers 1687 of 6169).

“the paintings introduce storytelling for viewers” (Helmers 1689 of 6169). 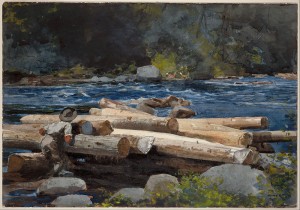 “[N]arrative is acknowledged by many critics as playing a role in the interpretation of paintings, yet it is not specifically theorized” (Helmers 1730 of 6169).

Talking of the idea of the naive spectator, Helmers says “the spectator may be quite sophisticated with narrative options, learned from the realm of the visual and verbal cultural imaginary: film, television, drama, dance, poetry, novel–even vacation photography and advertisements” (Helmers 1735 of 6169).

“the painting/text can never be just one picture or have a single meaning, because its construction depends on an unlimited variety of factors” (Helmers 1740 of 6169). Then lists many factors.

“The rhetorical meaning of a painting, then, appears to depend on perception and reception” (Helmers 1745 of 6169).

“Interpretation is a process of accrual in which past experiences merge with the evidence of the canvas to construct a meaning” (Helmers 1755 of 6169).