Words and Images
“[T]he relationship between rhetoric of the word and rhetoric of the image is far more fluid both on synchronic and diachronic levels than the divide permits” (Goggin 1822 of 6169). 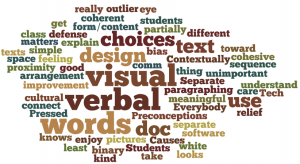 Words Over Images
“The continued bifurcation of visual and verbal aspects of rhetoric in subtle, and sometimes not so subtle, ways reifies the words–written language–as a measure against, and somewhat above, all other potential resources for representation and communication” (Goggin 1833 of 6169). 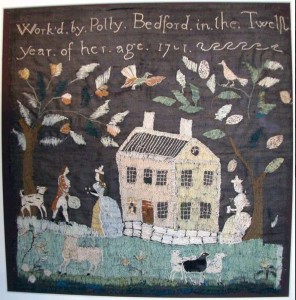 Words Are Images
“[A] rhetoric of the written word is visual, distinguishable from other forms of symbolic representation by the sense of sight” (Goggin 1837 of 6169).

“When images and words appear together in one discursive space, they operate synergistically” (Goggin 1837 of 6169).

Words versus Images
“If we shift attention to the material practice of creating/transforming semiotic meaning, the clear divide between image and word becomes even fuzzier” (Goggin 1842 of 6169).

This is important because of allocation of power within cultures–not just to the word but to the folks who can use those words.

Material Practices
“All discursive practices may be best understood as material practices” (Goggin 1881 of 6169).

“The technologies of each vary in permitting some possibilities for representation while constraining others” (Goggin 1884 of 6169).

“[T]he cultural, social and political expectation for how particular kinds of meaning may be represented …shapes what kinds of representations are permitted. That is to say, the materiality of semiotic practices and artifacts is socially, culturally and politically constructed (Street 170)” (in Goggin 1864 of 6169).

“What are the features that identify a material practice as a meaning-making, knowledge-generating endeavor?” (Goggin 1864 of 6169).

“How do we study the rhetorical practices and works of those who have turned to alternative allocative resources and have worked on the margins of privileged sociocultural landscapes, or in landscapes that are not recognized?” (Goggin 1873 of 6169).

By tracing the discontinuities both in the praxis of sampler making and the circulation of samplers, I show how the interdependent relationship between image and word shifts historically, contingent on the medium, the technological domain, the web of other semiotic practices in which a given material practice is situated, the social, political and cultural contexts, and the socialized individual subject positions. (Goggin 1878 of 6169). 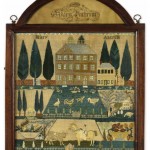 “In needlework, the semiotic resources for inscribing both glottographic and semasiographic systems are exactly the same” (Goggin 1893 of 6169).

Two classes of embroidery stitches (Goggin 1896 of 6169)
color work–stitches on the surface of the fabric (Goggin 1896 of 6169) That is the types of stitches, flat or cross-stitch, for example.
white work–categories of openwork: cutwork, drawn work, and pulled thread (Goggin 1903 of 6169) 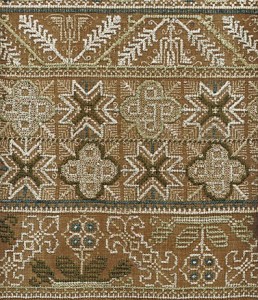 “Understanding the function of various kinds of stitches and combinations ‘gives the embroiderer power to create’ (Wearden 130)” (qtd in (Goggin 1909 of 6169).

“[S]ampler making served as a form of rhetorical invention, the art of generating effective and appropriate material for a particular rhetorical situation as well as the art of making critical judgments about that material” (Goggin 1931 of 6169).

“In part, sampler making was influenced by, and in turn influenced, the emergent print culture” (Goggin 1980 of 6169)–as works began to be signed and dated and have alphabetic writings.

Original pattern books had no instructions. The printers apparently assumed the needleworkers would know how to translate the art from a different medium to their own (Goggin 1992 of 6169). 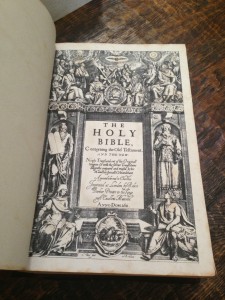 “[T]he Reformation led eventually to a displacement and transformation of religious images, with text increasingly replacing visual imagery” (Goggin 2014 of 6169). But, in fact, the Reformation was dependent on the increased textual availability of print, since a great deal of the movement was the ability of folks to read and interpret the Bible on their own. This was not going to happen when there were no cheaper texts available to read. I would say, therefore, that they might have influenced each other, but the Reformation itself was not the cause of text becoming more important.

There is a repetition of a set of information right here. A section is repeated. 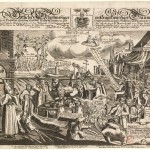 “Samplers became … tools of accountability” (Goggin 2088 of 6169) and “there evolved a ‘school style’ of stitching. Rather than the rich range of hundreds of diverse kinds of stitches, the dope was increasingly reduced” (Goggin 2091 of 6169).

When the samplers were reduced to cross-stitches only “sampler making no longer served as invention” (Goggin 2098 of 6169). 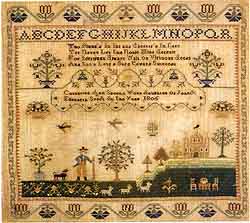 Goggin offers “the metaphor of hemming raw edges” for her conclusion–implying that she is binding something up, ending it, while leaving it in such a state as it can be continued, expanded, or minimized at a later date (Goggin 2153 of 6169).

She says that in her chapter she has “challenged the clear-cut division between rhetoric of the word and rhetoric of the image to contribute to a more complex definition of visual rhetoric” (Goggin 2160 of 6169).

Her final statements are probably the most widely applicable as she argues that “visual rhetoric” is a term with too limited an application, a term that creates blinders so that rhetoricians examining these specifics do not see all that can be included (2163).

We need a new term.

As a person who is often confused by the proliferation of terminology in rhetoric, due to its re-emergence as a discipline and its quick spread throughout or across various areas previously claimed only by other disciplines, I think she has a point, but was concerned by the term she would propose.

However, Goggin simply flips the term and proposes “rhetoric of the visual” (2167 of 6169), which, I would agree, encompass more than visual rhetoric–just because of the expansiveness in the phrase.