While I was searching for information for a conference paper, I ran across an interesting website that details the science fiction of the 1950s. FilmSite has information on American films from the Golden Age of Science Fiction. 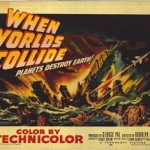 One of the films is a personal favorite of mine, When Worlds Collide. Not being a big movie buff, I watched this as a television movie when my brother had it on the television. The Noah’s Ark aspect and the giant slingshot into space were interesting, though the heroes (both the romantic lead and the man who gives up his place on the ship he created) are my favorite parts.

The piece ended with information on a television series I watched in re-runs:

The popularity of Robby the Robot spawned another film, The Invisible Boy (1957) with a supporting role for the ‘good’ computer robot. Robby also served as the prototype for the robot in the Lost in Space TV series (1965-68).

The website has a total of six different links on Science Fiction in Film.