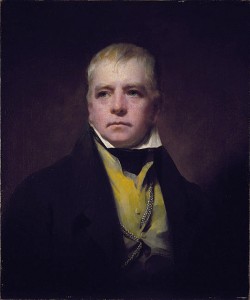 What caught my attention on the small sandwich board announcing the forum was the idea of brain science and “online” perception and the idea of virtual realities created by our brains for us as we read. This is not my experience with reading, but it sounded interesting and I thought I might be able to use some of the information, if it was, in fact, digital.

Having re-read the sandwich board, I don’t think there is any digital aspect, but it will be interesting nonetheless and I am interested in what Scottish academics have to say about Sir Walter Scott.

I went inside and signed up, as registration was required. They wanted my name, my address, and my email. I gave them that and was glad they didn’t want my phone number.

I wish I had make-up in my backpack today, as I’ve sweat the makeup off, but it appears that academics here don’t wear much makeup. I guess that means I’m good to go.

It appears to be an older crowd, most grey-headed, except for a couple of us with dyed hair. At 15 till, there are 26 people seated in the room, including myself. … It looks like there are 75 or so folks here as we begin.

I asked permission to drink my water and take notes on my computer during the address. Both of those, they assured me, are allowed.

The president of the Royal Society of Edinburgh is introducing. The RSE was formed in 1873, eight years after the birth of Scott. Scott served for 13 years as the president of RSE.

Scott, and others, today and think about why he is not as popular as he once was. Example, Sir Walter’s Scott’s Ivanhoe was shortened and recently republished.

What about Scott’s day?
Reading for the plot… “Read the conclusion for the 50th time.” Byron
great descriptions, “as Claude (Village Fete is one of his paintings) L… on skies” Ruskin

history of reading itself
Abigail Williams, Leah Price—both worked on anthologies in the 19th C, the use of portions of writings instead of the whole thing (extracts) 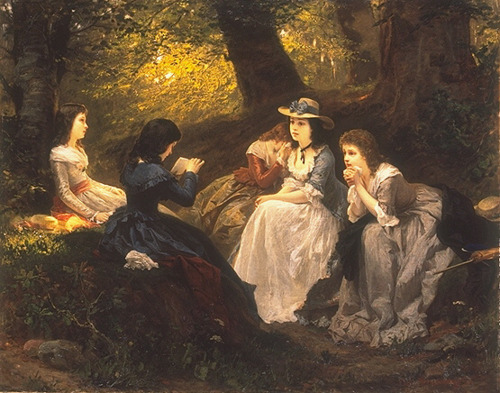 Folks “dipped into the Waverly Novels” as children…
shared versus silent reading
Showed images of lots of women/girls/children reading together.

performing works dramatically, but for your friends and family at home
no shame in just picking out the good bits
It is part of why the anthologies/extracts were popular.

What did they get from description?
Ruskin said he liked the descriptions…
But it’s not just like going to a gallery and seeing a picture.

neuroscience… evidence from brain scanning degree to which when we imagine things, we use the same resources as when we see them, taste them, touch them…

are they getting a simulation?
no. It’s complicated.
normal object perception—upside down—They look identical.
But right way round we can tell one of them is frowning evilly. 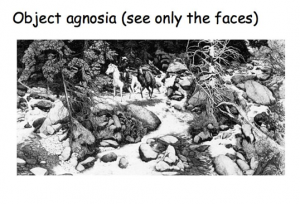 object agnosia (see only faces) illness
Face agnosia (see only objects)
While looking for images of these to post, I found a set of lecture notes that more fully develop the non-Scott related ideas the professor presented.
describing faces can mess with the problems
If the victims describe the face of the bad guy, they will have a harder time recognizing the face.
face is stored holistically as a single unit

Rebecca Ivanhoe
“turban of yellow silk suited well with the darkness of her complexion. The brilliancy of her eyes, the superb arch of her eyebrows, her well-formed aquiline nose, her teeth as white as pearl, and the profusion of her sable tresses…” broke the parts of her face into other sensations… brilliance was associated with diamonds… molded nose 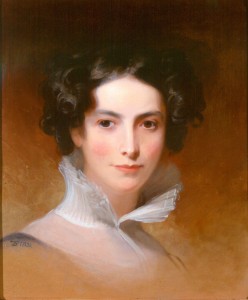 Rebecca Gratz was supposedly Scott’s model for Rebecca in Ivanhoe.

sable hair, pearl teeth (doll—Is this relevant? Does someone discuss?)

a sequence of perceptual manipuatlions relying heavily on other sensations

reconstruction and performance, how to reconstruct audience

How can we use this research?
Perhaps re-create Scott’s audiences’ experiences:
shared oral readings of extracts
science as a hook to enter the mind of the past
permission to cherry pick
permission to go slow (over a year to a class)