I have been thinking about my tenure and promotion portfolio quite a bit, as it is due in the fall, and I had a lot of thoughts about it relating to the chapter from Rice on imagery.

In the post, I wrote, How would images change composition if we were working on them first?

Just for Fun: Search and Find
Just for fun, I am going to take 10 minutes and search for images that I think might/could be useful for my portfolio. Ready… Set… Go…

What Searches?
Okay. So in ten minutes, what did I look for?
research
teaching
college
university There are no images of University in Wikimedia Commons from the United States.
instructor
professor
rhetoric
linguistics
rhetorical appeals
phonetics

That means I started with words (unlike what was suggested by Ball, as per my notes on “Assessing Multimedia Rhetoric”), but I was focused on images. (Not necessarily having images in mind first.)

What I found were not the kinds of things I would have expected/wanted, though some of them were particularly interesting.

I am posting my ideas of “the best.” In this case, these may not be images I ever use.


This is labeled an icon of teaching.
Even though we have fewer labs, since most of our students have computers now, I thought the image offered some interesting discussion points–including digital literacy, working with students individually, etc.
This was the “blank” for a particular sociology research report, but I thought it might be useful for illustrating how research moves and impacts various categories of the t&p portfolio.

For instance, I gave a conference presentation which won an award and the editor of a peer-reviewed journal attended and asked me to submit the article. After I did, and finished the revise and resubmit, the article was published. Then it was quoted in the New York Times.

However, the “research process” doesn’t match that connectivity. So it wouldn’t work for that, but it does give me an idea of a visual I could create.

This is a sketch of the sculpture of Rhetoric from the Cathedral in Laone. I wonder what the missing hand might be said to represent.

This is from Edzell Castle in Angus, Scotland. As I am in Scotland right now, it seemed relevant. It also, to me, looks like a woman dancing around on books. For some reason, I thought it might be how others view me. … A bit crazed, but really carefully crafted. 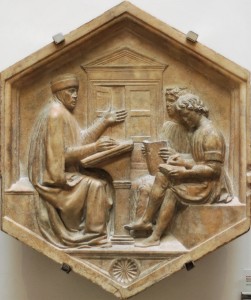 This image was in linguistics, but is the grammarian, which would have been a teacher of rhetoric. It is medieval, from 1437-1439, which is a time period I teach in literature. It has two pupils, but they are very much the teacher and the students separated.

This is a mystagogue, a person who initiates others into mysterious knowledge–so an educator. I like the imagery of conglomeration; it reminds me a bit of the difficulty of juggling all we need to do. However, I also do not think that it is a positive image and I don’t want to artistically/rhetorically suggest professor as monster. 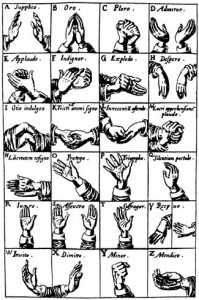 These are illustrations from 1644 that show gestures for various rhetorical appeals. I like the set, but I don’t think they would “make sense” in my portfolio, but would instead add complication.

Now that is an idea. Instead of the mystagogue, I could use these gestures from rhetoric to show the complexity aspect… I will have to think about that more.

Success or Failure?
While I am not sure this is the best idea ever, it certainly is an improvement over the “listing” first idea from “Juxtaposition Thinking.”

I did gain some things from the images. The idea of complication seemed to keep coming up.

I also think I will probably end up having to purchase (or create) my own images for the portfolio if I have more than a few.

Why only if I have more than a few? Because I already have a few that I think would work. They are pictures of my students, the school, my work, etc.