Discussing own engagement as a heritage educator: Offer Abbotsford as a case study, profound change through major capital development with a goal to re-engage local community with Abbotsford and with Scott’s work… 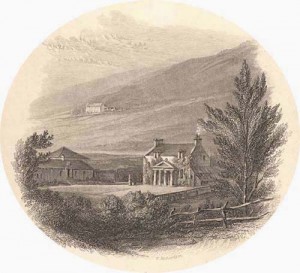 This is an image of Cartleyhole Farm c. 1812 (purchased in 1811). As soon as he purchased the farmhouse, he added the columns.
locals called it “clarty hole” (muddy hole)
Scott renamed it Abbotsford.
humble farmhouse cottage and set about to change it
buildings associated with writing, but this is synonymous with him because he recreated it (Jefferson and Monticello)

Scott spent ½ year in Edinburgh, ½ year on the borders.

strange classical portico added as soon as he bought it
3 different architects
1 architect “Scottified it” (scots or scott? We don’t know.)
more like abbeys, churches
Turner sketched the cottage and first extension 1819. This was a simple sketch, outline only on yellow/yellowed paper.
removed the farmhouse and added second building–seen in an image entitled “house from the south court”
used “salvaged” or reclaimed articles
One example is The Tolbooth door from the Midlothian… Tradition held this was the door you passed through on your way to execution. 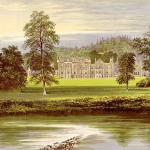 Among other things he called Abbotsford:
a conundrum castle
flibberty gibbet of a house
Delilah of my imagination

His literary career was always part-time.
laird of Abbotsford, land of his ancestors
property opened to public as a tourist attraction within 5 months of his death
g-g-g-great-granddaughter died in 200X. 2007 a trust was established. Capital project to preserve building and catalog objects and education.
11.68M pounds
2010 green light to project

Heritage Education is very well developed in Scotland. Focuses on historic places/spaces. Experiential approach. Explore, engage with, be inspired by…

Evaluate what Abbotsford could offer to targeted audiences?
failing to attract the audiences
usually it was enthusiasts who came, making their own links between Abbotsford and their own connections to work
borderers’ enthusiasm with Scott not being passed down
not looking at its community

Talked to the local teachers and found most of them were united in their guilt about their own lack of knowledge.
There is also a lack of teaching materials on Scott:
some adaptations, a few brochures, nothing related to Abbotsford
The teachers recognized it was in town, but didn’t understand how to link their classrooms to Abbotsford.
Scott’s writing was seen as a barrier. Difficult, long-winded… 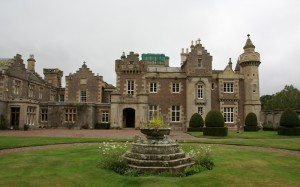 Been learning as I go on about Scott and Abbotsford. That has helped me because I am thinking it through from audience point of view.

2 major sources:
1. paper given Dr. E Gordon Brown, 2000, examined Scott’s impulse to create Abbotsford—ties between literary achievements and building
“antiquarianism wasn’t an idle hobby” it was writing and collecting absolutely indivisible for Scott.
2. Abbotsford is the product of antiquarianism and its inspiration.
Scott offers lots of engagement. David Hewitt “bricalage of fragments” commenting on Scott’s guidebook to Abbotsford
“museum for living in” constructing a creative place of inspiration
use heritage to engage
taking their first steps to engaging with the poems and novels


Examples of last 3 years:
young people recording Scott’s border ballads
started reciting them together
not prompted, but enjoyed it

140 come for 3 days every September (4 had been there before)
this year half had been
now in this one school everyone in SD 1-5 has come to visit.

They’re coming…
We worked with an Edinburgh poet who specializes in responding to historic places, Ken Cockburn.


Engagement with local primary story, design intensive day, create a play trail in Abbotsford
almost everybody in this small village has been to Abbotsford
from there, these children all know the name

nursery class came in this morning

Sir Walter Scott. He was a writer. He built this interesting place.