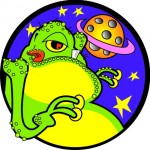 “The differences between science fiction and fantasy, though clear at either extreme, are becoming increasingly blurred at the boundaries” (Akon 6).

“[T]here is still no consensus on how to define the genre despite—or more likely because of—its twentieth century proliferation” (Akon 8).

“The polysemy of the term science fiction, reflected in the inability of critics to arrive at agreement on any one definition, is a measure of science fiction’s complex significance for our times” (Akon 9).

“The nineteenth century offers abundant evidence to support those who define science fiction most simply but with perfect accuracy as the literature of change” (Akon 16).

Haven’t gotten to the last section “America: Technophobia.” That should be interesting.