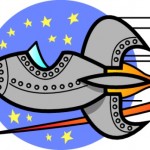 “The wonder-arousing theory contradicts the other main theory that science fiction writers often adopt, which is that their work is in fact scientific, a rational or “cognitive” activity” (Bratlinger 38).

“scale of disaster is … social and often cosmic” for science fiction (Bratlinger 40).

One thought on “Bratlinger on Science Fiction”