Four exercises and time for writing were introduced as ways to get over/around writer’s block by the Tea Party, a writing group that has been in existence for 20 years (much longer, they noted, than the political party across the pond).

1. Cliche killer
This is an exercise for a group to get the creative juices flowing.
They throw a stuffed bat, beginning a cliche. The person who receives it must finish the cliche, but not with a cliched response, and then toss it on with a new cliche.
“as black as…”
“Happiness is…”
“Love means…”
“as still as…”

2. Picture round or Two pictures
They placed lots of pictures on the table. (To do this for yourself, use google images for some different things. Put in words you wouldn’t usually use. Or peruse a museum’s website.)
Take 2 images. Write about them. Either together or separately.

The two images I got were:
a chandelier from Victoria and Albert Museum
a troll climbing out of a split wooden pipe, carrying a broom and a cricket bat (maybe). The room has poles with skulls on them and a gate with a key.

3. Genre bending
Here they had you pick a stock character from one baggie and a setting from the other. You couldn’t exchange from the baggie unless you got two that went together.

My spouse got:
sexually frustrated housewife
steampunk
(Originally he had “deal with the devil,” but the man across the table wanted to exchange.)

For this exercise, the instructions were in 20 minutes to write as much as you can.

I think I got the beginning of a milieu novel started.

4. Complications
After 20 minutes of writing, they said, “Let’s make things worse.” You could choose a large crisis (which they printed on white paper) or a small one (on green). I took one of each. However, the large one matched the scenario I had already written into the story. So I used the smaller one, which was perfect, since at the end of the 20 minute writing, the character had bobbled a curtsey and fallen to the ground. The small complication was “twisted ankle.”

Sample small complications:
loses keys
twists an ankle
phone is ringing, but can’t find it
a chill came over the character

Sample large complications:
character is lost
smells smoke and the wooden building they are in is on fire
family member dies

They gave us another 10 minutes to write. Then asked for volunteers to share. 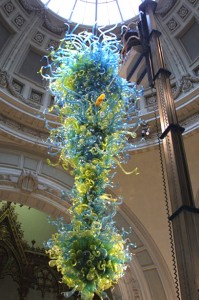 Here’s what I didn’t share:
from the two pictures writing

In black and white the troll terrifies, carrying a broom and cricket bat.

The modern art installation at Victoria and Albert Museum boasts an airy expanse of blue-green curls. These, once upon a time, were donated to Locks of Love by a troll.