“Many Faces, Many Voices: Intersecting Borders in Popular and American Culture” 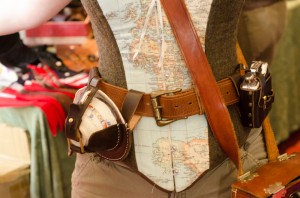 Originally coined in the late 1980s, the term steampunk was “retrofitted,” if you will, to describe a group of nineteenth-century-inspired technofantasies – darkly atmospheric novels of a time that never was… It is an uncommon hybrid of a term, describing even more uncommon tales of historical science fiction infused with Victorian visions of wildly anachronistic technologies.
— Julie Ann Taddeo and Cynthia J. Miller eds. Steaming into a Victorian Future: A Steampunk Anthology. Latham, MD: Scarecrow Press, 2013. xv.

…[O]ne common element arguably shared by all steampunk texts, objects, or performances is the one on which this journal is predicated: the invocation of Victorianism.
— Rachel A. Bowser and Brian Croxall, “Introduction: Industrial Evolution” Neo-Victorian Studies 3:1 (2010) 1.

These three quotations on both Neo-Victorianism and Steampunk begin to form the general parameters of what these fields are or will become. Our aim is to press against the boundaries of the accepted discourse in the hopes of finding new texts, images, sub-cultures, etc. that can expand or further define this new and exciting genre and culture. Any paper on any aspect of Neo-Victorianism and/or Steampunk will be considered.

Possible topics include but are not limited to: