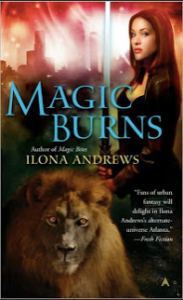 This past Saturday I went to a Writer’s Workshop, featuring Ilona Andrews, hosted by the San Angelo Writer’s Club.

Review
Beginning—character with problem. Commits to a certain course of action. Beginning is over.
Try not to start too much in the middle of action.
A little bit of set up is not a bad thing.
Don’t confuse the reader.

Middle
Middle is a part we never know when we start.

Example: Woman who has been fired. Needs to find job. Not hired. Not hired at second interview. You feel for this woman. She’s a good person. She works at a soup kitchen. Her husband left her. You sympathize with her. As she is going through trials and tribulations you feel emotional discomfort.

When they let go of rubber band and climax explodes and reward. All tension disappears. Exhale. 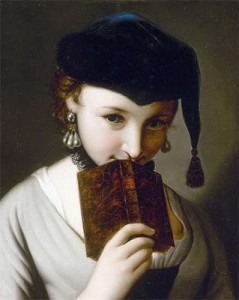 Reader starts even.
Then story depresses reader.
Then sends her even higher up.

Think of bad things that happened in book. Villain doing bad things. You want someone to kill him. Why do you hate the villain? Because the protagonist hates the villain.

EX: You open front door. You hear a growl. Can’t shut the door. Have to go outside.
Tense up.
Furry creature moves in the corner
Oh crap! Freeze. Look really hard at thing.
Bares teeth.
Fight or flight. Mace or fire extinguisher.
Creature charges.
Use weapon. Run inside and slam door.

Write out now. Opened door. Garage was dark. I heard a growl. I tensed. My heart sped up. Something moved—something in garage. Froze; pair of golden eyes ignited and saw flash of big white fangs size of my fingers. Grabbed a fire extinguisher. Charged. I ran inside.

Man and woman fighting
He says, she worse
He says worser, she says more worser

Build up tension. IN YOUR HEAD.
As a reader you are holding your breath. Then explosive motion at the end. Exhale.

This is what you do in the middle of your novel. You just do it on a larger scale.

A Good Bad Guy
People paint themselves into corner with bad guy not acting. Antagonist needs to be smart and dangerous. Needs to be actively causing problems.

Your antagonist should antagonize your hero.

More hurdles for them to overcome.
Think of Forrest Gump. Someone died.

Exercise:
Think of genre that you want to write in.
Find book. Take story apart.
You will be pulling the curtain back.

Things to concentrate on in the future:
Note problems in books that you read.
What did they do right?
Sympathetic or emotional protagonist.
Compelling beginning.
Compelling ending. (50% of impact of novel is how you end it)
You don’t remember the novels particulars, you remember how you felt at the end.