Through contemporary analyses of media fans and fan practices it has become readily apparent that one cannot generalize about fans as being merely passive consumers of mass-produced information (Jenkins 1992; Hills 2002). Many fans not only watch their favorite television shows (or read their favorite novels or watch their favorite films) but actively engage with the texts, incorporating the meanings and messages of the shows into their daily lives and then performing their fandom to others, fans and non-fans alike. In this way, such performances allow individual fans to reconstruct themselves through their use of media, sometimes pushing against commonly held notions of how one ought to construct a “self.” As Deborah Kapchan writes, “Performance genres are intertextual fields where the politics of identity are negotiated” (Kapchan 1995). Thus, through their performances fans use media products to actively construct their identities. (Ruh 165) 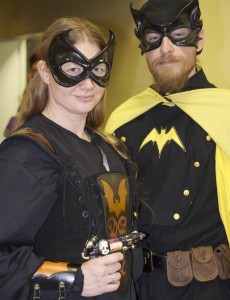 …fan behavior at conventions is sometimes mentioned as a part of a larger study of the fan community (Gillilan 1998). Sometimes the con is a site for collecting demographic data on fans (Berger 1977) or for investigating fans’ belief systems (Jindra 1994). (Ruh 167)

This is most evident in the costumes some fans wear to cons, and will be addressed in further detail below. Many anime fans would argue that their actions do have some kind of “subversive value” (Hebdige 1979: 3) even if it is only within the world of popular entertainment. For example, Brent Allison concludes that “the participants [in anime fandom] have been building a system of meaning outside of or in opposition to a perceived (if not actual) U.S. mainstream middle-class culture” in terms of national, cultural, and sexual identity, while at the same time he acknowledges that “the participants are also reproducing the rituals and underlying assumptions of the middle class worldview in anime fandom” (Allison 2009: 144-5). (Ruh 168)

con as a site of performance, I will be drawing on Beverly Stoeltje’s writings on the functions and structures of festival (1987, 1992). (Ruh 169)

the term “performance” as Richard Bauman has described it – a term that “usually suggests an aesthetically marked and heightened mode of communication, framed in a special way and put on display for an audience” (1992: 41). In particular, the anime con seems to meet Bauman’s criteria of a cultural performance – it is scheduled (sometimes over a year in advance), temporally bounded (the con has a designated starting and ending time), programmed (often to greater or lesser degrees of efficiency depending on the organizational skills of the people running it) and are coordinated and heightened public occasions (Bauman 1992: 46). Additionally, I am drawing on the ideas of enactment put forth by Roger D. Abrahams. This term casts a somewhat wider net than does performance, encompassing “any cultural event in which community members come together to participate, employ the deepest and most complex multivocal and polyvalent signs and symbols of their repertoire of expression thus entering into a potentially significant experience” (Abrahams 1977: 80). (Ruh 170) 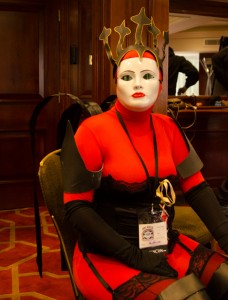 looking at specific instances of performativity that are taking place within the overall field of enactment that constitutes the convention. (Ruh 171)

One of the most striking visual elements at an anime con is the large number of people sporting all manner of outrageous dress. This is cosplay, a Japanese term that conjoins the English words “costume” and “play,” meaning the act of dressing up as one’s favorite fictional characters. (At US science fiction conventions this has customarily been known as “masquerade.”) We often understand and interact with each other through the codes of popular culture, and cosplay is just one example of this. In this way, the con provides a space for self-expression and identity creation through another type of performance. (Ruh 175)

Cosplay at cons in the US bridges the gap between the expression-oriented behavior of masquerade and the to-be-looked-at-ness of Japanese cosplay. In this way, anime fans are able to select the particular characters they wish to represent based on either how they see themselves or the particular role they choose to represent to the rest of the world. It is another example of the database fantasyscape in action. (Ruh 177)

The idea of embodiment, though, brings up the potentially problematic notion of racial depictions in anime and manga. … Anthropologist and manga scholar Matt Thorn explains that the reason why some (Ruh 177) people say that manga and anime characters are Caucasian is that the characters are not generally racially marked. Thorn writes that “…Americans and others raised in European-dominated societies, regardless of their background, will see a circle with two dots for eyes and a line for a mouth, free of racial signifiers, as ‘white,’” while on the other hand, “the Japanese are not Other within their own borders, and therefore drawn (or painted or sculpted) representations of, by and for Japanese do not, as a rule, include stereotyped racial markers. A circle with two dots for eyes and a line for a mouth is, by default, Japanese” (Thorn 2004). According to Thorn’s reasoning, Japanese creators of anime and manga are not trying to say anything at all about race, but are rather trying to depict characters in a graphically simple style. Indeed, one might say that the designs of many anime/manga characters, which are often relatively abstract, may be part of why the art form has done so well in the United States. (Ruh 177-78) 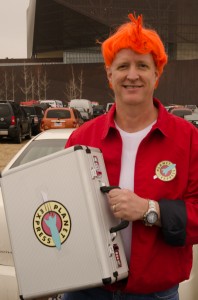 Many of the costumes employed by cosplayers are meant to be recognized by fellow fans at a convention. In this way, clothing at a con highlights the way in which our sartorial decisions are coded in everyday life. (Ruh 178)

the outfits of the cosplayers have specific meanings to those within the anime fan community. Thus, part of the act of cosplay is the public display and performance of subcultural knowledge. However, not all attendees at an anime convention choose to participate in cosplay. (Ruh 179)

Cosplay can shape the behaviors of participants outside of the space of the convention as well as within it. Even though individual cons are weekend events, as mentioned above many of the cons fit into a convention season. Cons throughout the year will often draw many of the same attendees, depending on the interest, free time, and economic situation of the individual fan. For some people, cons and anime structure social life outside of the convention itself. (Ruh 179)

Shared popular culture can be a powerful social lubricant, allowing people to make friends and develop relationships around common interests. Anime cons are just one aspect of this. Although most people will probably never attend such a con, and even fewer will try to dress as a favorite character, this phenomenon is merely an amplified version of how we connect with each other every day (Goffman 1959). (Ruh 180)