In research, particularly when I either do not know what I should be looking for (because it is relatively new to me or I am taking a different approach) or when I do not want to be doing the research I know I should be doing, I am likely to follow rabbit trails. It’s not an ADD thing, though I have that, but it is a feature or bug of the way that I do research. When I do not follow rabbit trails, my research seems to me to be staid and boring, whether it is or not. I like rabbit trails; it offers me a chance to learn something unexpected.

In this project on cosplay and memory I found a reference to Susan B. Kaiser’s The Social Psychology of Clothing: Symbolic Appearances in Context and put the book on my list of things to read. It’s a textbook, so very dense. It took me several days of reading, spread out over two weeks, to get through it.

I ended up with ten pages of notes, which, you will be happy to hear, I do not plan to reproduce on the blog.

Instead I will just put a few up and write what sparked my thinking in those quotations. Based on these notes (and a few others), this rabbit trail appears to have been very useful. 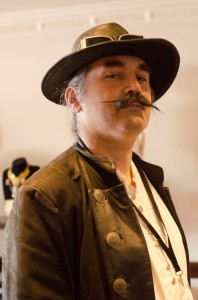 “Clothing and appearance symbols may be concrete or material objects, or they may be stored in memory as an image that evokes meaningful responses” (Kaiser 42).

Obviously this was included because it specifically references memory, which I am working with. Plus it is this idea of image evoking meaningful responses that is so important in cosplay. It’s no fun to play a character no one recognizes, so the image has to be relevant and memorable so that you can call up the associations in your audience.

“cultural messages are created through the process of representation. This process may involve selecting, presenting, structuring, and shaping elements of reality, by either reinforcing the status quo or creating new meanings (Hall, 1982, p. 64)” (Kaiser 51)
“cultural conventions may be applied in new ways or may be broken or bent” (Kaiser 51)

These specifically relate for my paper to cosplay mash-ups, where a cosplayer takes a character like Wonder Woman and makes her steampunk.

“clothes are more a factor in behavior displayed in specially defined contexts, as compared with routine or everyday contexts” (Kaiser 195)

This is significant as the cons where we cosplay are specially defined contexts and are not routine. 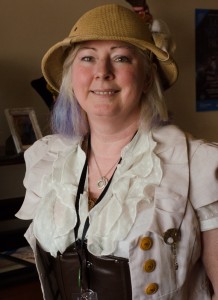 “it is important to stress that the meaning of signs is not intrinsically linked to the signs themselves, but rather that signs acquire their meanings through process of interpretation” (Kaiser 219).

A yellow shirt and black pants are not inherently symbolic, but as a stealth costume, they evoke memories of Batman. Cosplaying itself is also a sign whose meaning is interpreted. Hall costume or masquerade? What kind of cosplay is the person doing? Is it relevant to the con or out of place?

“The concept of semanticity refers to the degree of associative “fit,” or the correlation or close connection between an appearance sign and its referent (Harrison, 1985). A code that is high in semanticity is likely to be linked to conventional attire and to clothes that function as signals. On the other hand, a “fuzzy” connection between signifier and signified, or a lack of specific rules for interpretation, is likely to promote the functioning of clothing as a symbol—arousing emotion and referring to values but not neatly pigeonholed” (Kaiser 228).

I think that cosplay fits in this fuzzy connection section. There is not a set dress (aside from the non-costume jeans and tee) and thus the connection has to be made by both the audience and the cosplayer through memory and connections in memory.

“…intrigued interpretation. Some appearances, due to their complexity, aesthetic appeal, novelty, incongruity with the social context or the person or unfamiliar nature, become very salient to perceivers. Such appearances may attract the perceiver’s attention, appeal to his or her sensibilities, excite or fascinate, interest or even tantalize, perplex or even confuse” (Kaiser 313).

This may be what the cosplayer is going for–intrigued interpretation. 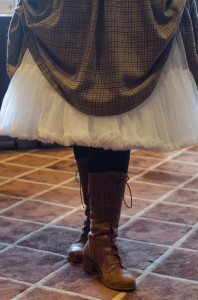 “As Fine (1987) notes, creativity is rarely a problem in the development of a known culture. This is true because creativity reflects novel combinations of previously familiar elements and bits of information” (Kaiser 357).

I took three different statements about uniforms (reveal and conceal status, confirm legitimacy, and suppress individuality) and wondered about them in terms of the ubiquitous jeans and tee shirts at cons. These jeans and tee shirts are not enough of a uniform to separate con-goers from others staying in the same hotel; costumes, however, clearly separate the groups.

Fashion encodes tensions between youth-age, masculine-feminine, and others (Kaiser 458). Does cosplay usurp those tensions or defuse them? How does costuming change the tensions?

I specifically referred in my notes to cross-dressing cosplay here. The first cosplayer I ever met was a young man cosplaying Sailor Moon, a Japanese anime magical girl.

There was a discussion in Kaiser’s book (462-67) about reactions to style. Two or three of these, I think may relate to con-goers: ego screaming (very different appearance through costuming), dandyism (elaborate historical costuming), and studied indifference (jeans and tee shirts).

“Ironically, stylistic reactions to mass culture—to the extent that there is one—often influence mainstream fashions and thus lose their original and ideological significance” (Kaiser 468).

I think this is particularly pertinent to steampunk, as elements have been in the mainstream of style for up to ten years. The opening credits to Doctor Who are now steampunk; I’m not sure that is mainstream, but the runways and the 5th Avenue Christmas windows have all had steampunk elements.

“Thus, any objects become fair game for appearance management in the act of bricolage [DIY fashion], and accessorizing becomes an art in itself. Hence, the strategic response of bricolage may reflect an individualistic means of personalizing what the fashion industry has to offer” (Kaiser 470).

Making (as in Maker Faire) and cosplaying have a lot in common. They are a conscious distancing from social norms and expectations, though in very different ways. Individualistic fashion through memory-invented character costumes seems to be very relevant. 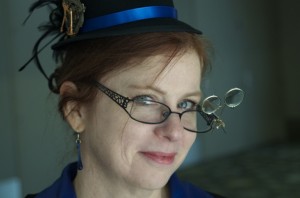 “the interplay between individuality and conformity, or identification and differentiation, is an important aspect of participation in the fashion process” (Kaiser 488).

Ethnic clothes can “provide a sense of symbolic self-completion (Wicklund and Gollwitzer, 1983) to complete an aspect of one’s identity in which there may be some need for expression” (Kaiser 536).

This, I think, is particularly pertinent to adolescent cosplaying, where young people are working through identities. It may also be pertinent to adults who are attempting to co-opt a desired attribute of a favored character and cosplay as a means of practicing or performing that attribute.

“Cultural discourses are like conversations that involve working through ideas. Yet they operate both visually and verbally, involving a circulation of objects, ideas, images, and values that form a kind of underlying logic for the social meanings we assign to our identity, clothes, and communities” (Kaiser 549).

Cosplaying would be a way of carrying on or out cultural discourse and the social meanings assigned would also be part of the cosplay. This is a dual role that memory is essential for. Interpretation depends on context and understanding.

Cosplaying is a way of constructing a new/particular identity. Some folks only cosplay a single character, while others play new characters each day of a convention.

“Identity work is rarely straightforward. We are likely to experience a range of mixed emotions about what our appearances mean and why. Davis (1992, p. 24) notes that we often have ‘inner dialogues’ in our heads as we debate certain issues about how we want to present and represent ourselves” (Kaiser 578).

This is why a single costume can mean various things to the creator/wearer. It is also how it can mean multiple things to a single viewer. Where is the memory work involved here? Perhaps in identifying which parts of a costume or cosplay performance are related to what factors that we are exploring.