Updating Villainy in Once Upon a Time
Torey Stevens

ABCs drama with fairy tale twist
Many popular fairy tales in the same continuity, with duality of identities.
Rumpelstiltskin is fairy godmother in Cinderella, crocodile in Peter Pan…

Fairy tale story of Rumpelstiltskin. Villain. Why does he want the child? What makes a villain a villain?
ABC seeks to answer this. 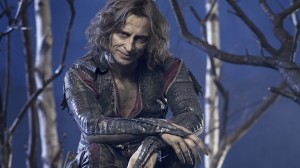 Rumpel as typical fairy tale villain.
Showcased in the 8th episode. He sat a fire. Played right into Gold’s hands.
Backstory shown
Was once a mortal man, beaten, laughed at, no power to protect his young son. At beginning of villainy, his motivation was wanting to protect his son.
Took the Dark One’s power as his own and kept the children of his village safe.
Harder to view him as a villain

Episode 12 “Skin Deep”
Magical spinner, Beast from Beauty and the Beast
Dark curse, can be broken by true love’s kiss
Belle, she becomes his maid, he saves her people… Rumpel had lost his son after Dark One’s power became his.
Rumpel lets her go. True love.
Denial of true love’s kiss, because he wants to be re-united with his son.