The Language Nerds have a great post on how different languages give the idiom “speak of the devil.”

10 Jokes about the English Language from LostInthePond.

67 Hilarious Reasons Why the English Language is the Worst! from BoredPanda

After six generations of no speakers of Wopanotooaok, nineteen students are receiving their education entirely in that language. I wonder whether the sounds of how people speak are the same?

The movement to revitalize native American languages started gaining traction in the 1990s and today, most of country’s more than 550 tribes are engaged in some form of language preservation work, says Diana Cournoyer, of the National Indian Education Association.

But the Mashpee Wampanoag stand out because they’re one of the few tribes to have brought back their language despite not having any surviving adult speakers, says Teresa McCarty, a cultural anthropologist and applied linguist at the University of California Los Angeles.

‘‘Imagine learning to speak, read, and write a language that you have never heard spoken and for which no oral records exist,’’ she says. ‘‘It’s a human act of brilliance, faith, courage, commitment and hope.’’

from the Boston Globe

The Conversation‘s article “The Americanisation of the English language: a frightfully subtle affair” says that Americanisms aren’t killing English.

Spelling goes both directions fairly equally, the article argues.
” Take spelling, for example – towards the 1960s it looked like the UK was going in the direction of abandoning the “u” in “colour” and writing “centre” as “center”. But since then, the British have become more confident in some of their own spellings. In the 2000s, the UK used an American spelling choice about 11% of the time while Americans use a British one about 10% of the time, so it kind of evens out.”

I am amazed by the discussion of apostrophes, as a class of English majors was unable (or perhaps only unwilling) to explain the rules of apostrophes or admit they knew them.
“Americans also use a lot more apostrophes in their writing than they used to, which has the effect of turning the two words “do not” into the single “don’t”. They’re getting rid of certain possessive structures, too – so “the hand of the king” becomes the shorter “the king’s hand”.”

Having been unaware that gradable adverbs were a thing, I was intrigued to learn that these include boosters (like, for Brits, frightfully and awfully) and down-toners (like quite and rather). American boosters would be really and very. I’m not sure we have down-toners–even the spell check doesn’t recognize the word. (Don’t get too excited. I realize that specialized language for various fields are often underlined as misspelled when they are not. I just don’t know if down-toners is an example of that.)

It’s an interesting article with more than I discussed here.

Though the arguments on the verb shifts they make seemed to me to be “old hat,” I had no idea what their point on the use of do changing was exactly. I’m glad to have found an IFLScience article that summarizes that point.

The use of the periphrastic “do” emerged in two stages, first in questions (“Don’t they say?”) around 1500 CE, then in imperative and declarative statements around 200 years later. Plotkin explained: “It seems that, once ‘do’ was introduced in interrogative phrases, it randomly drifted to higher and higher frequency over time. Then, once it became dominant in the question context, it was selected for in other contexts, the imperative and declarative, probably for reasons of grammatical consistency or cognitive ease.”

How they know the cause/reason for its selection in those contexts isn’t clear. Perhaps that is just their supposition.

My last post, Evolution of English, talked about a study in language drift from UPenn, as described in a Science article.

LifeHacker’s “Stop Resisting Change to the English Language” by Jaime Green is talking about the same study.

A new study from the University of Pennsylvania shows that randomness is a more powerful component of English’s evolution than previously thought. (The findings can’t necessarily be extrapolated to other languages—as one of the researchers told The Guardian, “English is weird.”)

For a long time, linguists have thought about language as subject to evolutionary selection, much like species. When a language has more than one way to say something, or variable spellings, the “fittest” one wins, with speakers, en masse, selecting for ease, speed, and regularity. But the new research shows that those streamlining forces don’t always seem to win.

By tracking past-tense spellings of 36 verbs—those found to have at least two spellings, like quit/quitted and spilt/spilled—researchers could see a slice of how English, from 1810 to the present, evolved. And they saw that it made no sense. Six of the 36 verbs had one form being actively selected for. And for four of those six, the chosen past-tense form is the irregular one, which in grammatical terms is decidedly unfit.

Researchers expected selective pressures to steer language toward regularity, making the language easier to remember (and more logical!). But no, they saw “Dove” instead of “dived,” at least in American English; “woke” instead of “waked.” There may be other logical factors driving these evolutions—the researchers speculate, for example, that “dove” is favored because it lines up with the similar-sounding, and similarly patterned, “drove.”

Dive’s past tense is dove. It’s an old irregularity and it’s a common one. That’s why it stuck around. That was my argument in 2013 and I haven’t changed my mind. Now I have someone else’s research to help show more research-focused proof.

Two evolutionary biologists and two linguists from the University of Pennsylvania analyzed historical language data to examine the evolution of English. In a letter to Nature, they argue for random drift, according to Michael Erard in a Science article.

The researchers used statistical methods from population genetics to analyze three well-known changes in the English language: how past-tense verbs in American English have taken the “-ed” ending, (as when “spilt” became “spilled”), how the word “do” became an auxiliary verb in Early Modern English (as in “Did you sing?”), and how negative sentences were made in Old to Early Modern English.
…
When it came to the verbs, they found that drift’s influence was stronger when the verb was less frequent. Only six past tense changes in their data set, such as “lighted” to “lit,” were deemed to have changed for purposeful reasons, such as being easier to learn and use.

This doesn’t seem to me to be that exciting or revolutionary, though I suppose the research to support it is significant.

Why doesn’t it seem revolutionary? Because I already knew it–and gave a speech on it, in 2013.

Verbs have gotten simplified. We used to have seven different sets of normal endings. Now we only have one—that –ed you learned in elementary school. However, the most common verbs, the verbs we use the most, are the ones most likely to have kept their original form—so there are [still] seven sets of endings instead of just one.

That is rather cool because you can always tell that a verb is old—really old—if it has an odd ending.

For example, the past tense of Dive—and I’m going to tell you this, not ask you because one of the authors I have been reading recently misused it twice—is dove. Dive, dove. But the past tense of jive is not jove. Jive is a new verb, so its past tense is jived. dive, dove… jive, jived.

The –ed ending was one of our seven endings in English, so just because a verb ends in –ed in the past tense doesn’t mean that it isn’t old… We’re exceptional like that.

The BBC has an article on Americanisms killing the English language, which considers the arguments of a new book by Matthew Engel, That’s the Way it Crumbles: The American Conquest of English. Because by English, I mean British English.

Speaking on the wireless in 1935, Alistair Cooke declared that “Every Englishman listening to me now unconsciously uses 30 or 40 Americanisms a day”. In 2017, that number is likely closer to three or four hundred, Engel hazards – more for a teenager, “if they use that many words in a day”.
…
It’s often pointed out that plenty of these Americanisms were British English to begin with – we exported them, then imported them back. A commonly made case in point is ‘I guess’, which crops up in Chaucer. When Dr Johnson compiled his seminal 1755 dictionary, ‘gotten’ was still in use as a past participle of ‘get’. But as Engel points out, good old English is not good new English. Moreover, his beef isn’t really to do with authenticity; it’s more to do with our unthinking complicity. Because it’s not just the cookies and the closets, or even the garbage, it’s the insidiousness of it all. We’ve already reached the point where most of us can no longer tell whether a word is an Americanism or not. By 2120, he suggests, American English will have absorbed the British version entirely. As he puts it, “The child will have eaten its mother, but only because the mother insisted”.
…
None of this would matter if these imported words were augmenting our existing vocabulary….Engel quotes researchers behind 2014’s Spoken British National Corpus, who found that the word ‘awesome’ is now used in conversation 72 times per million words. Marvellous, meanwhile, is used just twice per million – down from 155 times a mere 20 years earlier. ‘Cheerio’ and, yes, ‘fortnight’, are apparently staring at the same fate.

Fortnight is an interesting word–which I didn’t learn the exact meaning of for years after I first read it in novels and basically figured it meant “a specific length of time.” Once I realized it was fourteen-nights shortened, it was way easier to remember what it meant, two weeks.

An article on the blog for Oxford Dictionaries entitled “Ten Things You Might Not Have Known about the English Language” caught my attention. It’s several years old, but it contains interesting information. The only ones I didn’t know were that -ize was British and not American and how many people are in process of learning English.

During classes that I teach, I often talk about the lack of a language academy that has the ability to decide what is “good” English. While I might have been more in favor of the idea in the past, after I heard that Brazilian Portuguese became the official standard for the Portuguese language, I was much less interested. (Can’t find the source I read that in.)

Only recently (say in the three years) have I learned that Noah Webster decided to Americanize English in order to make it better.

Grounding his [Webster’s] wholesale reforms upon a saying by Franklin, that “those people spell best who do not know how to spell”—i. e., who spell phonetically and logically—he [Webster] made an almost complete sweep of whole classes of silent letters…
A good many of these new spellings, of course, were not actually Webster’s inventions. For example, the change from -our to -or in words of the honor class was a mere echo of an earlier English uncertainty. In the first three folios of Shakespeare, 1623, 1632 and 1663-6, honor and honour were used indiscriminately and in almost equal proportions; English spelling was still fluid, and the -our-form was not consistently adopted until the fourth folio of 1685.
…
A great many of his innovations, of course, failed to take root, and in the course of time he abandoned some of them himself. 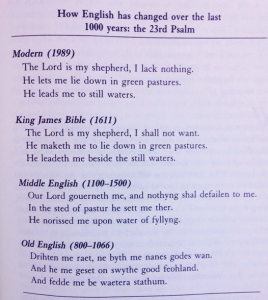 I read the Middle English with a Scots accent.