Ravitch writes, â€œWhen I asked why so few reading passages were drawn from classic childrenâ€™s literature, the publisher explained that it was a well-accepted principle in educational publishing that everything written before 1970 was rife with racism and sexism. Only stories written after that date, he said, were likely to have acceptable language and appropriate multicultural sensitivity.â€

As if. As if the 1970s were a golden age of English literature and the 19th century were not. We are all trying to be culturally sensitive, but where oh where did we get the idea that we would slam the door on our illustrious heritage to do so?

This is why so many reading lists out on the internet are not useful. They skip the classics and give a skewed view of literature.

For research, the computers in my classroom were great. And I can see how a class on a novel would be interesting. “Search the net and find four articles that would be interesting/useful for someone who wanted to learn more about the background of this novel.”

Actually, now that I wrote that, I am thinking that might be a good pre-reading suggestion. We’re doing Frankenstein in Freshman 2. What if I gave that as a pre-reading assignment? That might really work.

Was reading a blog this morning. A very negative, inaccurate blog. I try to read alternative views, to keep my vision clear. This one said that you and I are stupid. Well, if you are an American he said you are stupid. He said I am an “uneducated clod”. He said my neighbors were. (Remember blogs are addressed to the reader. “You and yours” means “me and mine” to the reader.)

He also, foolishly, said that he was sure I didn’t know the last 5 books I’d read. Because Americans are too stupid to read. He said my neighbors wouldn’t know either. He took my answer off his site and disconnected comments from it.

This was my answer:

The Little Girl in the Blue Dress

The Culture of Mesopotamia

Wonders of the Ancient World

Archaeology and the World

When Love is Blind

This is a short list, maybe half, of the books I read THIS WEEK.

Maybe the people you know don’;t read, but the people I know do. (Except for two.)

That’s the end of my answer.

I was ANGRY. I was furious that someone, I assume an American, would tell fellow citizens that they are too stupid to read.

I went to nursery class this morning to teach the three year olds like I do on Thursdays. I asked my fellow teachers, who I only see at class and do not know personally, if they could name the last 5 books they’ve read. The shortest list was 11. The longest was 17. That’s from 3 people, women who teach nursery school.

I asked my parents if they could name the last 5 books they’ve read. They did. My mom has read 9 in the last two days.

Of course, since I read a lot, you would expect people I know to read a lot. I do know two people who don’t read a lot. But they can also tell me the last five books they’ve read. One of them is a doctor and he reads multiple technical/medical journals every month.

A quote from the blog that made me so angry.

Our education level is far below, MANY other countries in the world. Consider the latest statistic that over 60% of Americans read below a 4th grade level. Don’t believe it? Name the last five books you’ve read in the past year. Ask your neighbor to do the same. (If you can do it without naming a magazine article from Car and Driver, I applaude you.) You get a gold star and can consider yourself part of the “elite” 40%)? The rest of the world knows we’re a bunch of uneducated clods…

According to our government, though, our children have an average education for other highly industrialized nation. Our government wasn't too happy that we were average, though. But we certainly aren't below average for the world if we are average for industrialized nations. I would be amazed to find someone outside our own country calling us uneducated clods. Because we aren't.

If someone is going to say something like you and I are stupid, they ought to be able to back up what they say. And they can’t. Because we’re not.

What does that tell you about the rest of what they say? It isn’t reliable.

I know that people think reading has gone down in America, but I am not sure why they think that. One hundred years ago, my great-grandmother didn’t even finish high school. She was busy working as a secretary in a bank, trying to support my grandmother. She didn’t have time to read. And she was not a stupid woman.

Yes, the most elite read one hundred years ago. Certainly Jefferson, Adams, Washington, and Franklin (200+ years ago) were avid readers. But the regular folks in town? Were they avid readers? I don’t think so. 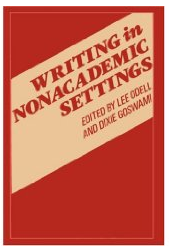 First paragraph of â€œMaking Information Accessible to Readersâ€Â from Writing in NonAcademic SettingsÂ (Odell and Goswani). Â Easiest to improve specific sentences and words.Â  Read through first looking for local changes.Â  Then read again for global changes.Â  Does this mean that I focus on local?Â  Or just focus first?Â  Does this happen much?