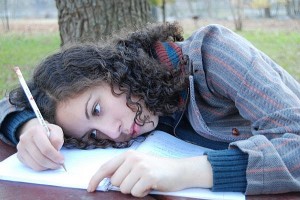 Heather Sellers requires her students to turn in handwritten first drafts, because she can tell the difference between handwritten works and typed compositions, even within the same story.

I have been reading a lot about this.

I read an article in the last month about how Nietzche’s work got terser as his blindness forced him to type instead of handwriting his works.

So the technology we use to write impacts how we write. Interesting. And true from my own experience.

Related to an earlier post on the topic of the impact.

Far later than I should have, I finally got Outliers at the store and am in the process of reading it.

As I read it, I am joyful, scared, happy, afraid, satisfied, and amazed. But right now I am shocked. Shocked at what Gladwell says and how right I think he is.

I’m fifty pages on from the most important things I have read, yet I didn’t stop until I was shocked.

If you’ve read the book, you will know what I am talking about when I say that I am Southern. My family is from the Appalachians. And that is why I am shocked. The shock was enough to get me off the couch and up to the computer to type what I want to remember the most.

“autonomy, complexity, and a connection between effort and reward–are, most people agree, the three qualities that work has to have if it is to be satisfying” (149)

Hmmm. Need to think about that for homework.

“Work that fulfills these three criteria is meaningful” (150).

“Hard work is a prison sentence only if it does not have meaning. Once it does, it becomes the kind of thing that makes you grab your wife around the waist and dance a jig” (150).
“if you work hard enough and assert yourself, and use your mind and imagination, you can shape the world to your desires” (151).

And, for another shock, I apparently was very much at risk of death on my plane trip in 1988 to Thailand, not just physically assaulted by an old Korean guy. … Thankfully my Korean Air flight did not crash.

Update: Have finished it. Going to use part of it in my linguistics class.

Now, first, let me say that I think that flipped classrooms are a great idea. I think that having the students do engaging work in the classroom, as discussed by a long-time blog read Casting Out Nines. One of my friends is presently flipping her classroom and I am excited about her work. 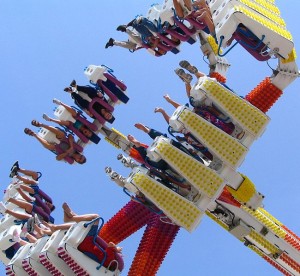 However, EdTech Magazine‘s “Colleges Go Proactive with Flipped Classrooms” begins with a statement that can easily be read the wrong way:

Professors are moving away from the straight lecture approach and running more hands-on learning and group activities in class â€” and theyâ€™re using more technology to get it done.

When I first read it, even though I know what a flipped classroom is, I thought the article was saying that lectures were disappearing while group activities were being done in class. The third paragraph clears up this misunderstanding by explaining that students watch the lectures outside of class and do group activities in class.

There’s a big difference between having no lectures and having lectures but not in class. (Yes, I know the first sentence can be read that way. It is not the most common way of reading it, however, even by someone who understands the flipped-classroom concept.)

I have heard people question flipped classrooms because “If the teacher gives the lecture online, why do the kids even have to come to class?” and “You just want to flip the classroom so you can stay in your pajamas all day.” (WHAT?) These are academics saying these things, by the way.

If students can come to class already having heard the introductory material and then while they are in class practice applying that material, I think everyone will be better off.

By ReadyWriting, Dr. Lee Skallerup. Great Xtranormal video showing what our students think and do about reading–some of them anyway.

Turnitin identified 10 types of plagiarism. I was glad to see this list, not only because it seems fairly complete, but because it gives names to plagiarism and shows the wide variety of plagiarism possibilities.

A colleague and I have had an ongoing discussion concerning what plagiarism is and how it should be assessed. I am far more likely to be strict than the other person, to the point that they would argue that types 6-10 are NOT plagiarism, but something else.

What do you think?

1. Clone: Verbatim copying without additions/subtractions.
2. CTRL+C: Largely verbatim copying from a single source with minor changes.
3. Find-Replace: Verbatim copying with key words/phrases changed, often automatically.
4. Remix: Paraphrasing content so that it flows seamlessly with other work.
5. Recycle: Plagiarizing from older works of your own, self plagiarism.
6. Hybrid: Combining correctly cited material with non-cited material in the same passage.
7. Mashup: A mix of copied and original content from various sources without attribution.
8. 404 Error: Including citations that do not exist or are inaccurate.
9. Aggregator: Properly cited material that contains little original content.
10. Re-Tweet: Includes proper citation but uses too much of the original wording, content that should have been quoted but was paraphrased.

The results were pretty straightforward. Clone plagiarism was the highest both on the problematic and the frequency scale, easily taking the highest score in both. Mashup plagiarism was nearly as common as Clone plagiarism but was ranked 3rd in terms of being problematic. CTRL+C, instead, was second in problematic and it was also third in frequency.
â€¦
Turnitin wrapped up the report by making three recommendations for educators. Those are:
1. Intent Matters: Stating that the intent of the alleged plagairist matters and should be weighed when deciding what, if any, disciplinary action should be taken.
2. Guide Students: Help students avoid unintentional plagiarism and make them aware that professors know what is going on.
3. Use OriginalityCheck: Finally, they encouraged educators to give students access to their originality reports so they can see their mistakes and correct them.

If you are looking for what to tell English majors, towards the end of their four-year degree, Sell Out Your Soul has a lot of good answers in the comments.

Other notes from The Progress Principle.

“even in tough circumstances, it makes sense to take strategic measures to keep their workers creatively and productively engaged” (Amabile and Kramer 1118 of 4703).

Progress is the most important positive trigger.
If you feel that you are making progress, you are happier about the work and so make more progress.

Video games feature progress bars… (1454 of 4703)…
What if classes had progress bars? You would have to know approximately how many assignments there were.

“Consistent daily progress by individual employees fuels both the success of the organization and the quality of those employees’ inner work lives” (1671 of 4703).

Progress is first (of the positives?).

Catalysts (support) are second. Here is the list of what teachers should be doing:
1. Setting clear goals.
2. Allowing autonomy.
3. Providing resources.
4. Giving enough time–but not too much.
5. Help with the work.
6. Learning from problems and successes.
7. Allowing ideas to flow. (1776 of 4703)

Something for administrators to consider:
“Three main climate forces shape the specific catalyst and inhibitor events that occur inside an organization” (1818 of 4703)
consideration for people and their ideas
coordination
communication (1826)

How do we teach our students to succeed? At least partially by teaching them to fail.

“One of the most important things I have to teach my students is that when you fail, you are learning.” Students gain lasting self-confidence not by being protected from failure but by learning that they can survive it.

What does teaching them to fail mean? The article isn’t completely clear, but it does mention:

at the most innovative schools, classes are “hands-on,” and students are creators, not mere consumers. They acquire skills and knowledge while solving a problem, creating a product or generating a new understanding.

This is what I am trying to create in my classrooms. I am not sure how successful I am, but I am moving in that direction.

If, as the last post suggested, willingness to work is the key to becoming a genius in a subject, what can I do to have that happen in my classes?

How might I bring into my composition classroom time for my students to think things through, to figure them out, which will make them learn better? How can I encourage the willingness to keep working on something which will help them succeed, even excel, at English?

I have tried, to greater and lesser success, several things.

Scaffolding:
One thing that is supported (nay, required) by the department here is scaffolding. Give the students a bit of the work to do. Have it due. Then have them do another bit. Having little bits at a time encourages them to work on it over time, which gives their brains time to think about it when they aren’t working on it.

That is not something they get if you only have the major projects due.

Most students will work on the major project in a single section of time, perhaps two.

This focused experience is true of strong students as well as the poorer ones. It is just that the strong students tend to spend that first section of time at the beginning of the project’s timeline and then the second section at the end, so that there is space in the middle for their brain to have thought through what they were working on, which enables them to see where they could have done something better and fix it.

Malcolm Gladwell, in Outliers, says that “the world could be so much richer than the world we have settled for” (268).

Public education works:
In this section Gladwell is talking about several important issues, among them the fact that public education in the United States WORKS (255-260).

Based on fairly rigorous research by Karl Alexander, Gladwell says the real problem is our summer vacations. Over summer vacation wealthy students learn a lot. Students in poverty learn almost nothing. Over five years of summer vacation, they don’t even learn enough to raise their reading level a percent. Rich students raise their by 52% over the same amount of time.

I do not believe the answer is to reapportion wealth. But if we are seriously interested in equal opportunity in the United States, then we need to have summer school, at least for the lower SES students–not as a punishment but as a way of enabling them to keep up with the wealthier children.

Of course, that is K-12 and I am not in K-12 education anymore. I will say, however, that I saw that my children retained more of what they had learned if they were in school year round. So while my children were in elementary, middle, and high school, we had year round classes.

I think it does. It certainly matters to my students from lower socioeconomic circumstances. They have more to catch up with and not being immersed means they aren’t catching up.

Based on Alexander’s research, it seems likely that not only do those students not continue to make progress but that they might actually fall behind more during their vacations–especially as summer vacations for college are even longer.

Once students are doing internships in their majors, they probably don’t need summer school sessions. But until they are, many of them would probably benefit from year round school.

It’s something to think about and something that I might want to talk with my students about–individually.